It’s safe to say that Boston is a city filled with historical facts just around each and every corner.  Despite being a prominent city in US history, the largest city in New England has so much more to offer. The luscious green parks are abundant, the long waterfront walks are plentiful, and the amount of shopping will surely make any woman smile.  Being one of America’s oldest cities, it’s safe to say that there are a ton of activities to keep busy.

Compared to New York (a city that spans over 305 square miles, versus a measly 48), Boston is much smaller and therefore way more realistic for a long weekend. There’s still a wide array of activities, but not too much to make it seem overwhelming.

Luckily, if you stay at a hotel in the city’s center, almost all the sites will be within walking distance and you won’t waste your time (or money) waiting for the T.  We stayed at the luxurious Hyatt Regency Boston, and thoroughly enjoyed every moment.  I would recommend this hotel in a heartbeat (you can read my full review here).
But let’s get real – when you only have roughly 48 hours to explore, a set plan is very important and more than necessary. Put on your walking shoes and don’t plan on eating before you arrive.
Day One:
8:00 A.M.
Head to one of my favorite spots for breakfast (Bruegger’s Bagels or Boston Common Coffee Company) and indulge in an artisan breakfast sandwich or wild bagel creation.  The coffee options at both are outstanding (including coconut coffee and salted caramel – YUM).  If you want something sweeter, try a donut at BCCC – they looked out of this world.
You’ll want to head to breakfast earlier than later, as many of the popular joints get crowded rather quickly.
Pro Tip: Skip a big breakfast, as you’ll want to pace your eating throughout the day. Trust me on this one. Boston really is a foodie’s paradise. 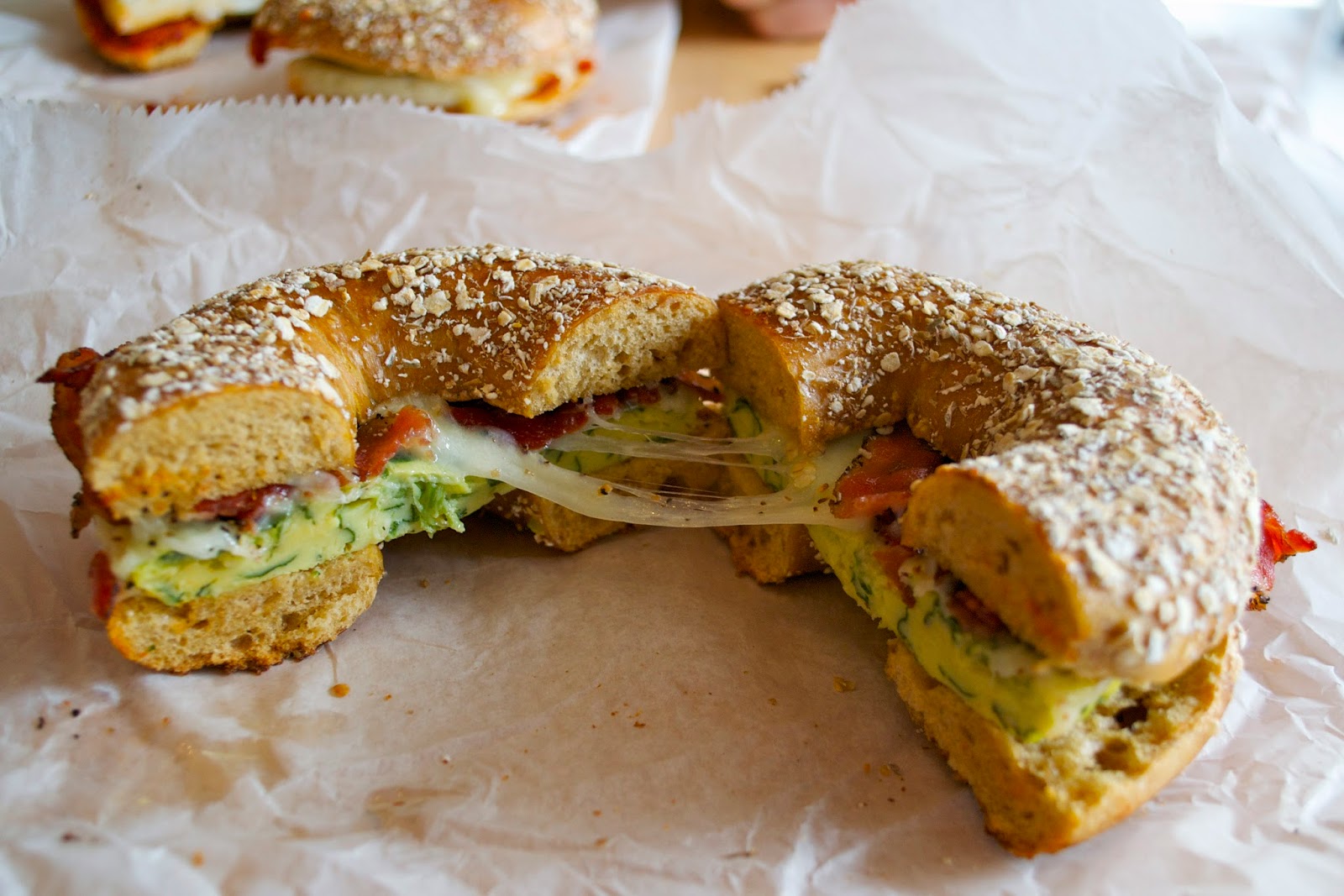 9:00 A.M.
Spend the morning in Boston Common, the oldest park in the United States. The park covers over 50 acres of land, and features structures and monuments including the Boston Massacre Memorial, Boylston Station (the first subway station in America), Brewer Fountain, and the Frog Pond (which turns into an ice-skating rink in winter months). Being the starting part of the Freedom Trail, you won’t want to miss this!
Adjacent to Boston Common is the Public Garden, which contains a lake and many planting areas that are maintained by the city.  Here you can sit in a Swan Boat and get peddled around the lake by a tour guide under the large and delicate weeping willows. The park boasts a wide variety of tree species as well as flowers which vary from season to season.  During the spring and summer months, the Public Garden is beyond filled with colorful blooms – make sure to bring your camera!
Why not have a picnic in the park and eat your breakfast on a bench?  It’s the absolute perfect place to people watch and enjoy the fresh air and lush gardens.
Pro Tip: The park is sometimes erroneously referred to as the “Boston Commons”.   Call it this, and you’re basically screaming TOURIST! The proper name is “Boston Common”, although “The Common” is widely used as well. 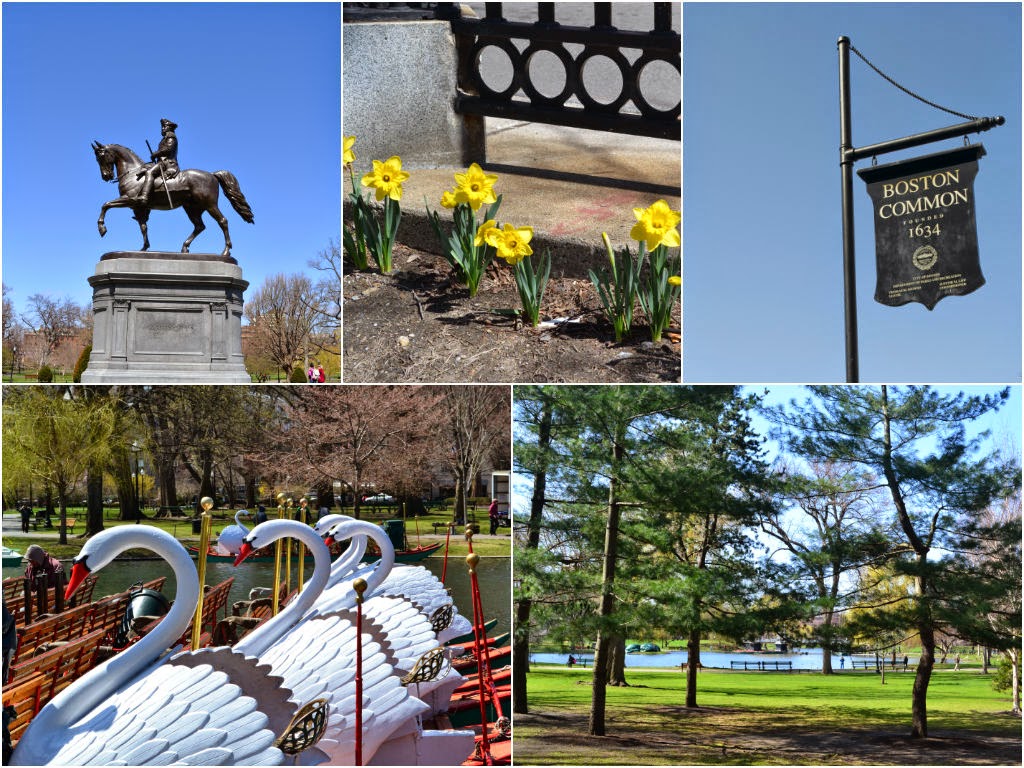 11:30 A.M.
After relaxing in the park for a few hours, make your way to Faneuil Hall Marketplace, one of the first urban marketplaces in the country. Faneuil Hall includes three long granite buildings called North Market, Quincy Market, and South Market, home to many stores and restaurants.
On the cobblestone promenades surrounding the buildings you will find world-renowned street performers and musicians, just waiting to entertain those around. Grab some lunch and watch the very talented artists for a while.
With over 50 shops and dozens of options for lunch (including lobster, oysters, and clam chowder), you’ll want to spend a few hours here. The area is filled with history, but you’ll also find the popular American Eagle and Abercrombie and Fitch within it’s grounds.
Although extremely touristy, it’s a must-do for the first-timer in Boston.
2:30 P.M.
Walk a few blocks up to the North End, which is known as Boston’s Little Italy.  It is the oldest residential community in the city, and people have lived in the area since they first settled here in the 1630s.
The narrow streets are lined with cafes, small grocery stores, and Italian restaurants, loved by both locals and tourists alike.  Make sure to stop at one of the famous bakeries to satisfy your sweet tooth with a cannoli or other tasty Italian treat.  Top contenders are Mike’s Pastry Shop, Marias, or Modern.  We sampled the peanut butter cannoli and mint chocolate chip cannoli at Mike’s and left wanting more.  The lines can be long, but just wait.  You’ll be happy you did when you’re stuffing your face with cannoli cream or a lobster tail.
Don’t miss Paul Revere’s House, the Old North Church, and Union Wharf. Hang out by the waterfront for a bit too, preferably with some gelato in hand.
4:30 P.M.
Next on the agenda: the ever-so-picturesque Boston Harbor Walk.  Boston is surrounded by water, and it would be a shame to miss out on fantastic views of the waterfront. Make sure your camera is charged, as there are infinite picture-taking opportunities.  Spanning almost 50 miles, don’t expect to walk the entire path.  However, don’t fret- all areas are scenic and easy to follow with Harbor Walk signs practically everywhere.
If you whizzed through the morning’s activities and have extra time, spend an hour or so at the New England aquarium.  The Harbor Walk route takes you right to it.  If time isn’t on your side, you can still see the seals at eye level in their tank (for free).

In the summertime, there are numerous sailboats out on the water, and the occasional whale-watching boat tooting its horn.  All in all, it’s a great way to relax and spend a sunny afternoon after running around all day.

Pro Tip: Take a break at the end of Commonwealth Pier.  You’ll have the best view of the harbor, and be able to relax your feet for a bit before continuing.
7:30 P.M.
It’s (finally) dinnertime!  Head to Avenue One for some seasonal local cuisine, and make sure to order a bowl of New England clam chowder and the crab cakes – my new favorites.  All the dishes are downright delectable, and the ambience and wait staff will surely exceed all your expectations.  The bar located adjacent to the restaurant is an excellent choice for some after-dinner drinks. 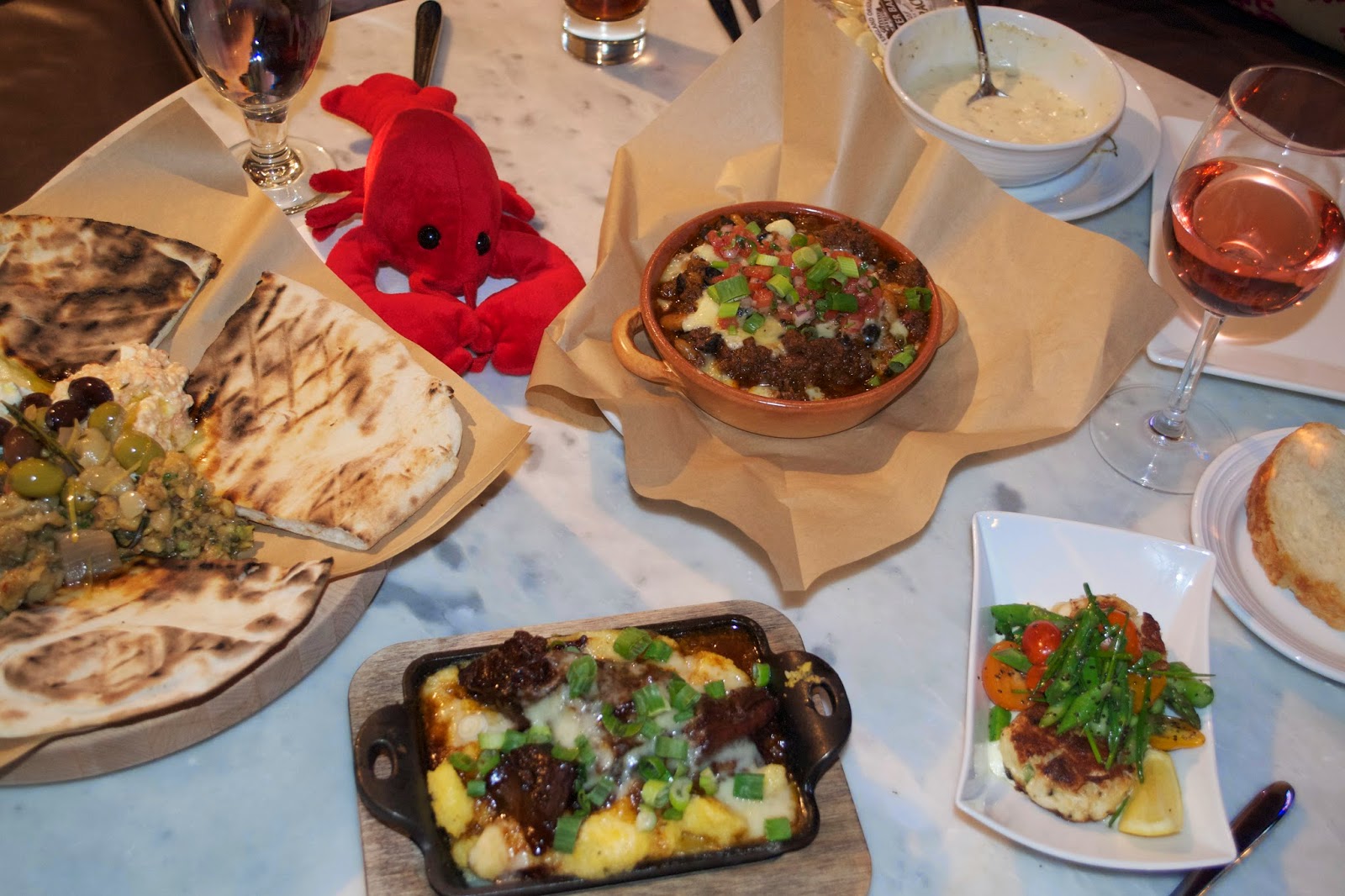 By now you are more than likely exhausted, and I suggest crawling into bed earlier than later to prepare yourself for the next day’s activities.
Day Two:
9:00 A.M.
Start off your day at Elephant and Castle for a hearty breakfast, which was only steps away from our hotel at Hyatt Regency Boston. Here you can enjoy scrumptious platters of banana stuffed french toast, complete with syrup, whipped cream, and applewood smoked bacon, honey ham or British banger sausage.
Or try out the poutine, you can never go wrong with some early in the morning!
If you wind up getting an early start, you’re in luck, because Elephant and Castle begins serving breakfast at 7am.
11:00 A.M.
A walk along Newbury Street will surely hold your attention with all of its elegant boutiques and wide variety of restaurants.  Known to have the city’s top shopping, this chic area is lined with both high-end specialty shops (great for window shopping) as well as more affordable chains.
Basically, a great spot for foodies and shoppers alike! Be sure to try out Stephanies’ on Newbury and Snappy Sushi when your stomach starts to growl from all the shopping.  If shopping isn’t your thing, take a stroll in the area among the beautiful architecture and people-watch.
Spanning 8 blocks and filled with funky salons, fine dining, and trendy galleries, there is most definitely something for everyone here.  If you love Newbury Street, continue onto Commonwealth Ave, which runs directly parallel and has a similar cool vibe.
2:00 P.M.
Time for more shopping! Once you go up the elevator at the Prudential Center, you’ll notice the dramatic glass ceilings and high-end shops.
Green spaces are located throughout, which we thoroughly enjoyed when we needed a little break from walking.  You’ll find a Pink Berry in the middle of the tower, which is obviously the key to my happiness (I would have it every single day if my belt allowed me to).
You’ll think I’m crazy, but if you’re like me – it’s time for your mid-afternoon “snack”.  Head to Wagamama’s in the Prudential Center for some of the best ramen and Japanese noodles you’ll ever have. Share if you want to have room for dinner, as the portions are rather large.
After yet another meal, it’s time to take the elevator to the Skywalk Observatory, the only location in New England offering 360-degree panoramic views of the Greater Boston area. You’ll see the Charles River, Fenway Park, Copley Square, and Boston Common, among other areas from 50 stories high.
Don’t worry, those with a fear of heights have nothing to worry about.   The observatory is an enclosed walk around with large picture windows overlooking the city.  Choose to wear a headset (featuring an audio tour pointing out important landmarks) as you take in the sweeping dramatic views of the city, or simply explore yourself.
Pro-Tip:You can get from Bolyston all the way to the South End/Back Bay Station without stepping outside (perfect for when it’s too hot or too cold out!) 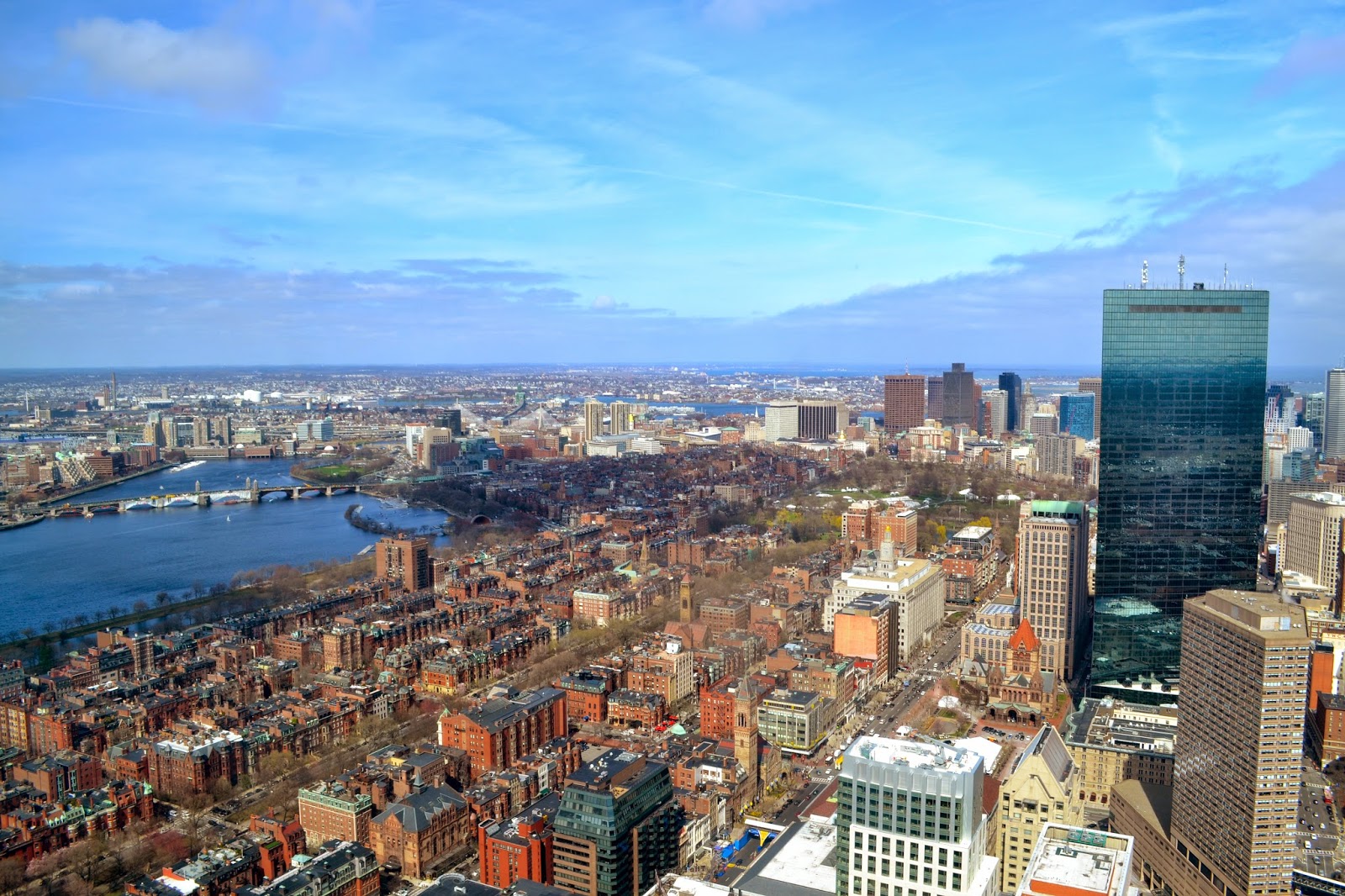 6:00 P.M.
You can’t leave Boston without catching a game at historic Fenway Park! Get tickets beforehand, and hang out at the stadium prior to the game feasting on sausages and hot dogs from nearby food carts.  If tickets are unavailable, stop by one of the local bars for a drink and to cheer along.  Trust me- you won’t be alone.
If your visit to Boston doesn’t coincide with baseball season, think about taking a Fenway Park Stadium Tour during the day. You’ll have to swap around a few activities, but the excitement at Fenway shouldn’t be missed!

Pro Tip: If you are a Yankees fan, keep that information to yourself.  Red Sox fans are extremely loyal and you wouldn’t want anyone to “accidentally” spill some mustard on you! 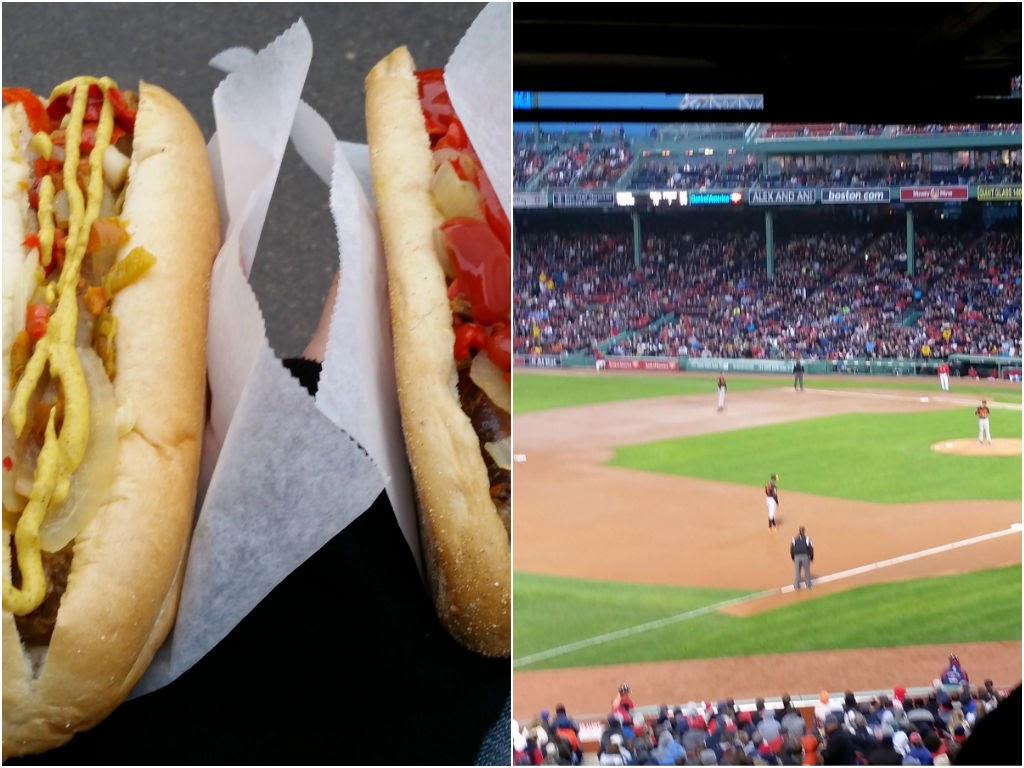 If you have additional time: 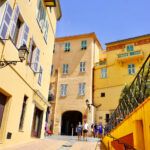 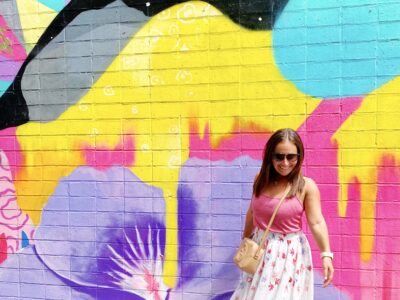 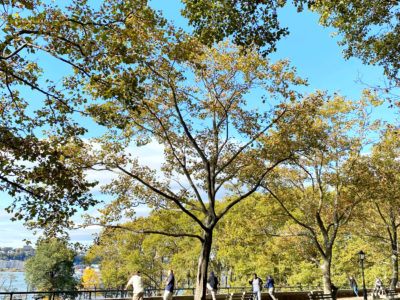