Can’t get away right now?!  Trying to decide where to jet off to next?  Have a few hours to spare? A travel movie might be your short-term solution!

When we watch movies, our mind is instantly transported to another place, whether it be a different planet, different country, or different time period.  We get to experience things we never thought possible, all through the eyes and body of another.  Sure, I’d rather be gallivanting around a new city or literally stuffing my face instead of watching someone on my TV take in all my gluttonous pleasures.

But hey, sometimes it’s just not possible to take those extra days off from work and physically get away.

However, movies are a great way to find inspiration for future trips, to trick our minds into being away (a two hour ‘trip’ is better than no trip at all, right?), and to lay off social media for a short period of time.  Something we all could use every now and them, myself included.

So start poppin’ that corn (or opt for the microwave kind-guilty), throw on some comfy sweats, and claim your spot on the couch.  It’s movie time! 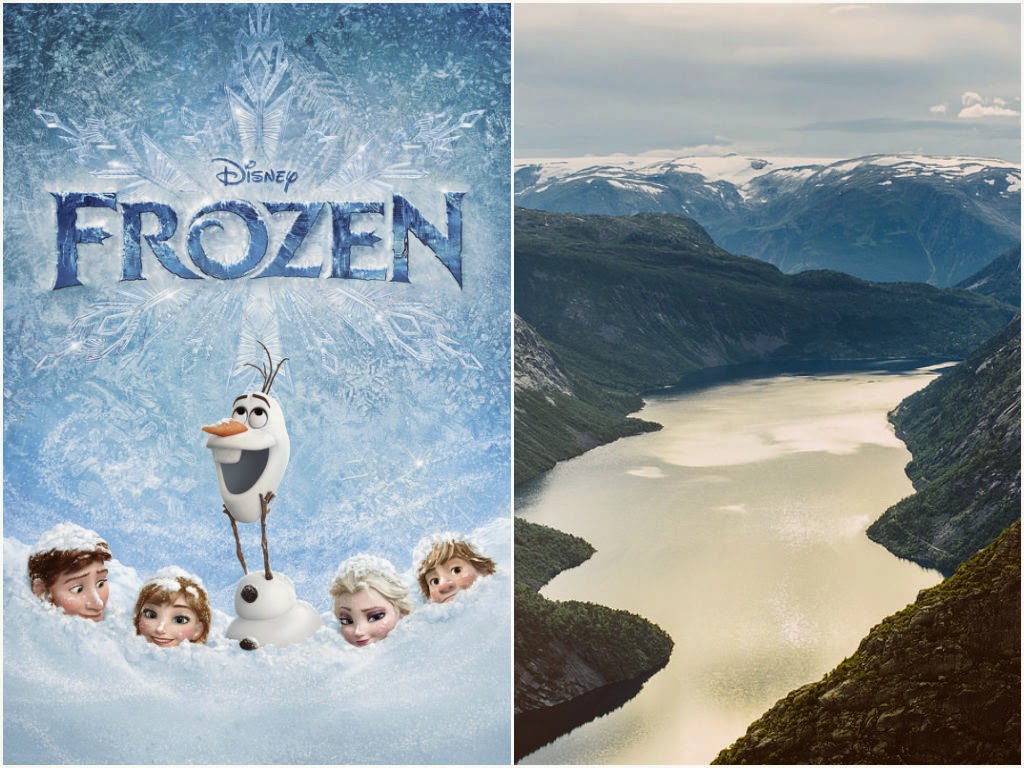 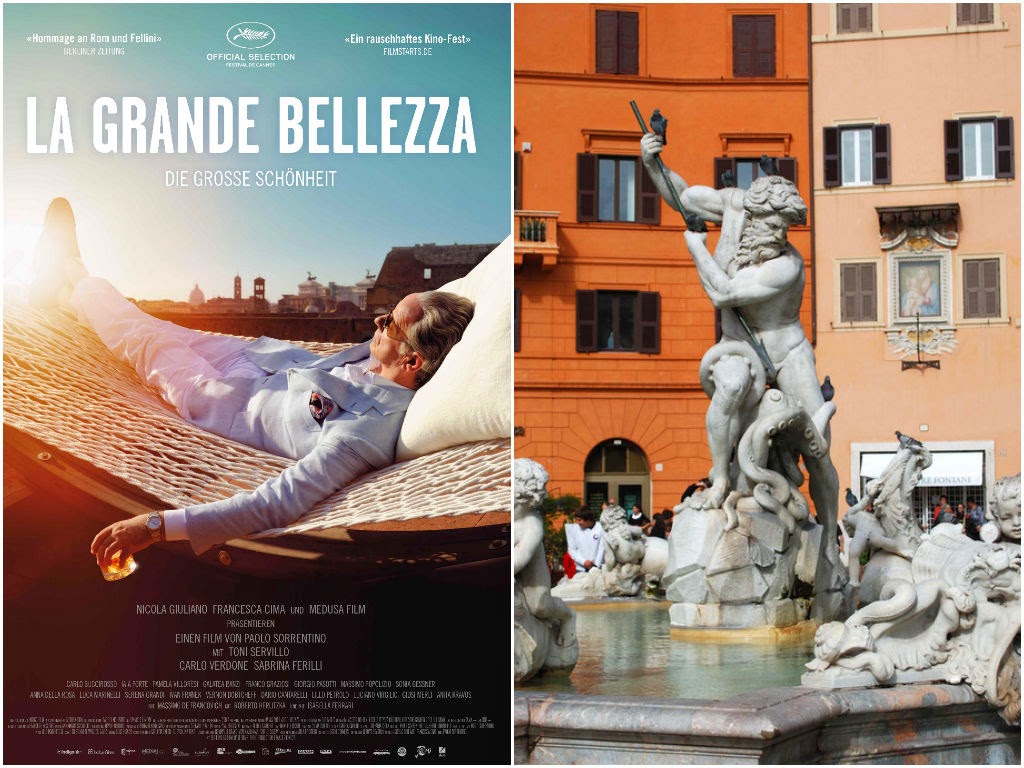 This Oscar winner (best foreign film) from 2013 makes me crazy to get back to Rome. I’ve been to the city a few times before but have always concentrated on seeing the Rome of the past, a Rome of ghosts and historical sights. Fascinating as that Rome is, this glimpse into the city’s highlife, its literary circles and flawed searching-for-meaning-in-life intellectuals has made a different Rome come alive for me – a world of individuals, of glamour and decadence, art and emptiness, but also of hope. – Wandering Carol 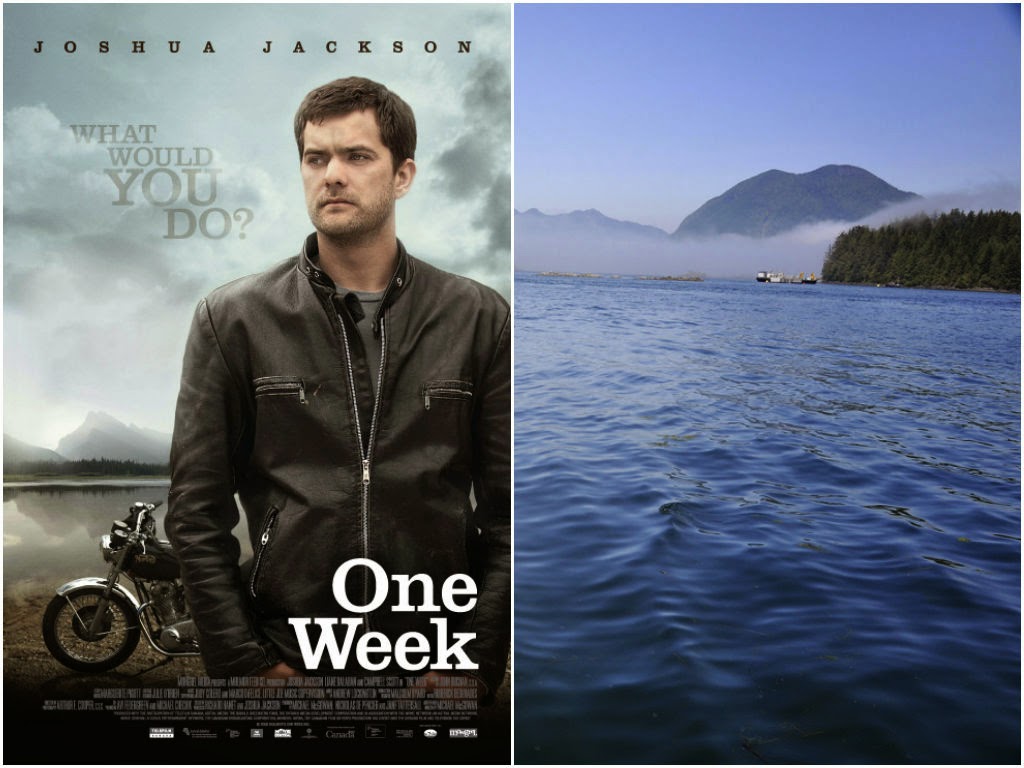 The movie One Week is about a young man named Ben Taylor who learns he has terminal cancer and decides to go on a motorcycle ride across Canada (well from Toronto to Tofino). One Week has Canadian icons, amazing landscapes, quirky sites, and shows how travel, even if it’s just for a week, can change your perspective on life. Last year I drove from Calgary to Toronto and saw many of the locations featured in One Week. I loved exploring areas of my country I’d never seen before, and I hope to do another road trip across Canada again. – Take Me to the World 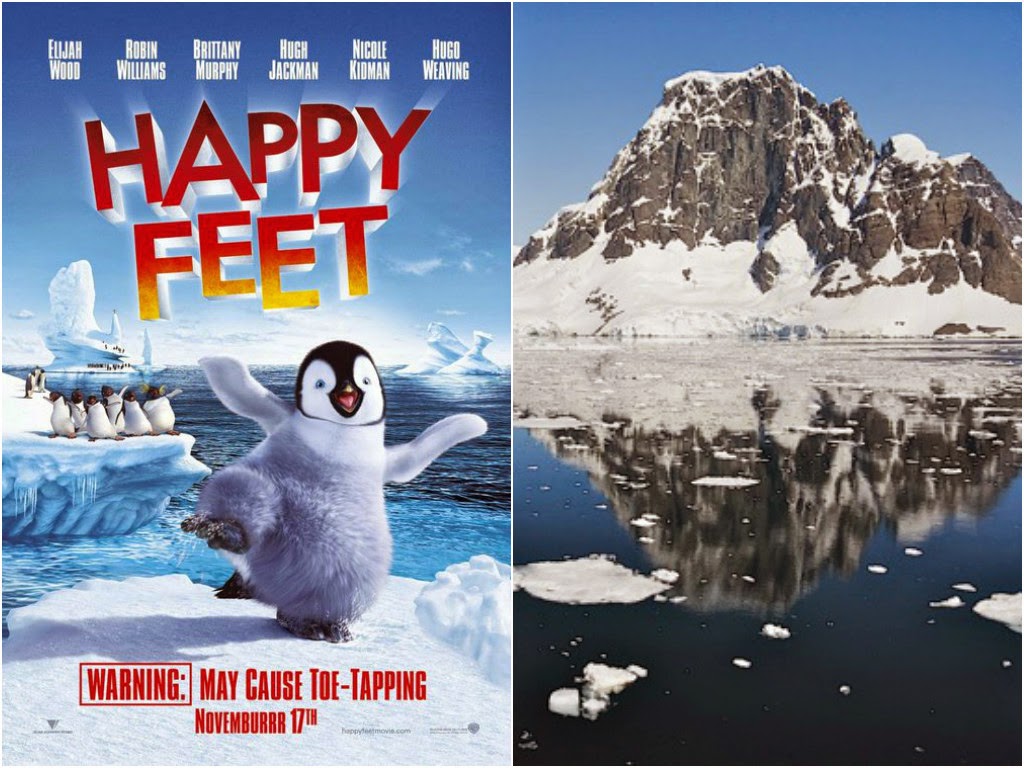 5) Under the Tuscan Sun – Tuscany, Italy 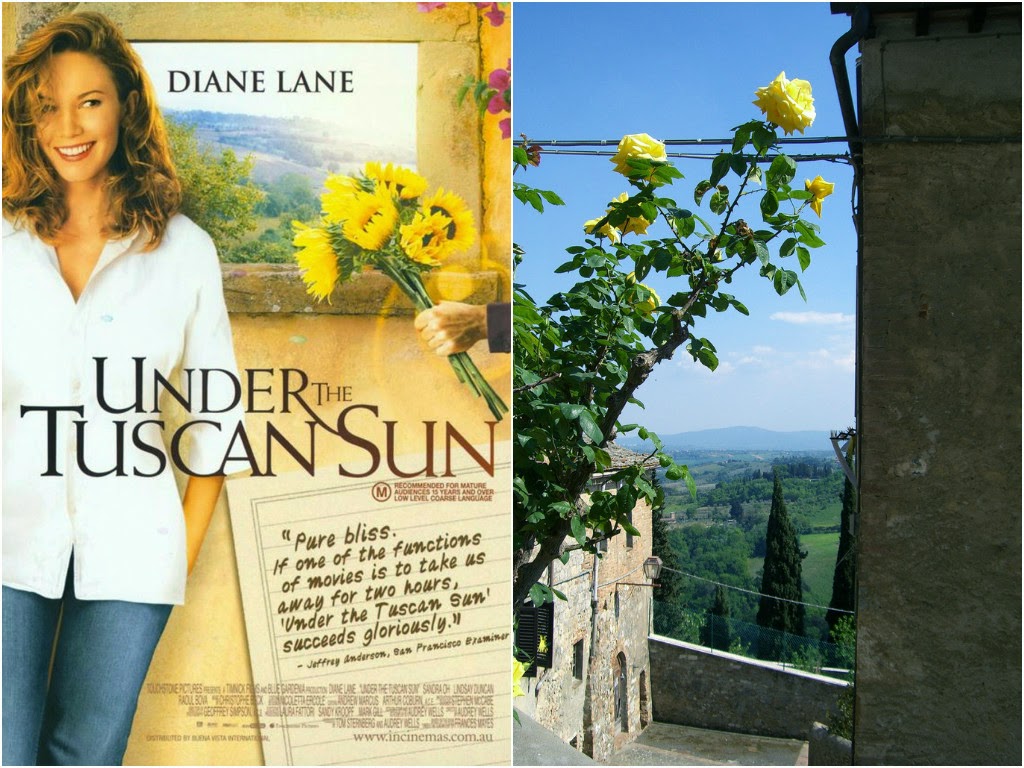 When I saw the movie “Under the Tuscan Sun,” I knew I had to get to Italy. I loved the town portrayed in the movie, I loved the landscape, and I loved the people. When I finally made it to Europe, I made sure to spend three weeks in Italy alone, and I finally got to experience what it was like to be in Tuscany. Still, my time spent in Firenze and Pisa wasn’t enough. Someday I want to go back and bask in the Tuscan sun again. – Solitary Wanderer 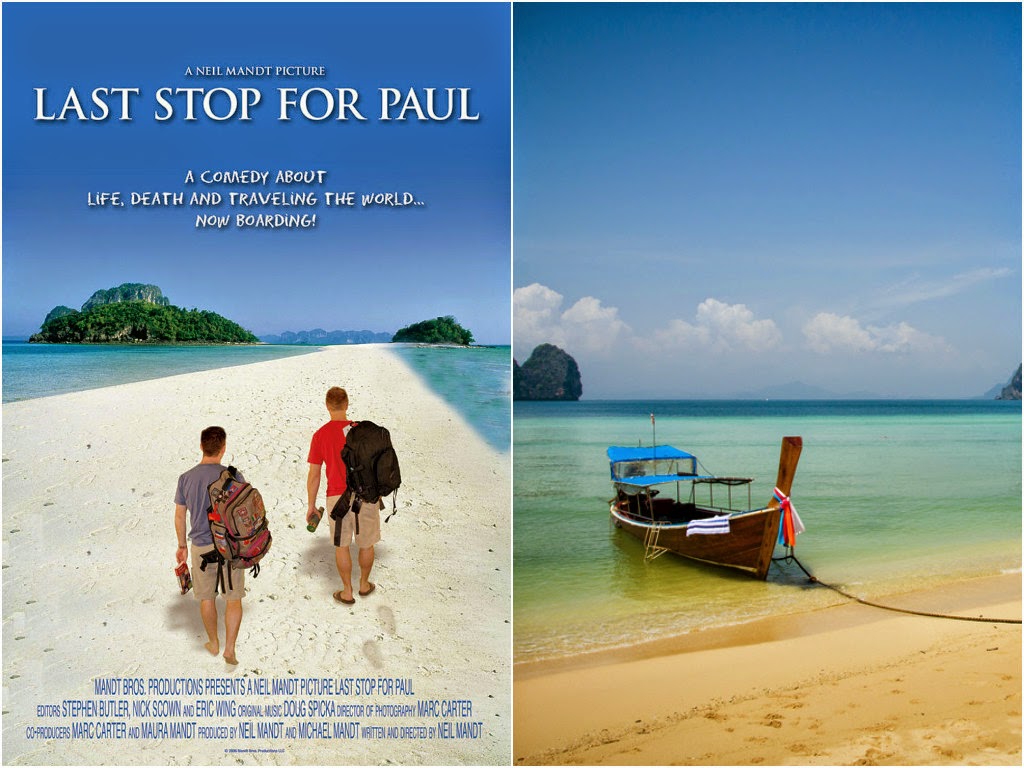 One of my favorite independent “wanderlust” movies is “Last Stop for Paul” by director, actor and traveler Neil Mandt. Anytime I watch this I immediately want to hit the road. Neil films in the moment, unscripted with no cast and the results are quite entertaining. In the movie, two friends bored with life in Los Angeles decide to go to a Full Moon Party in Thailand as part of their budget trip around the world to scatter a friend’s ashes who recently died. Memorable scenes are from Thailand but there are plenty of other countries represented. – Dave’s Travel Corner

7) Made of Honor – Scotland 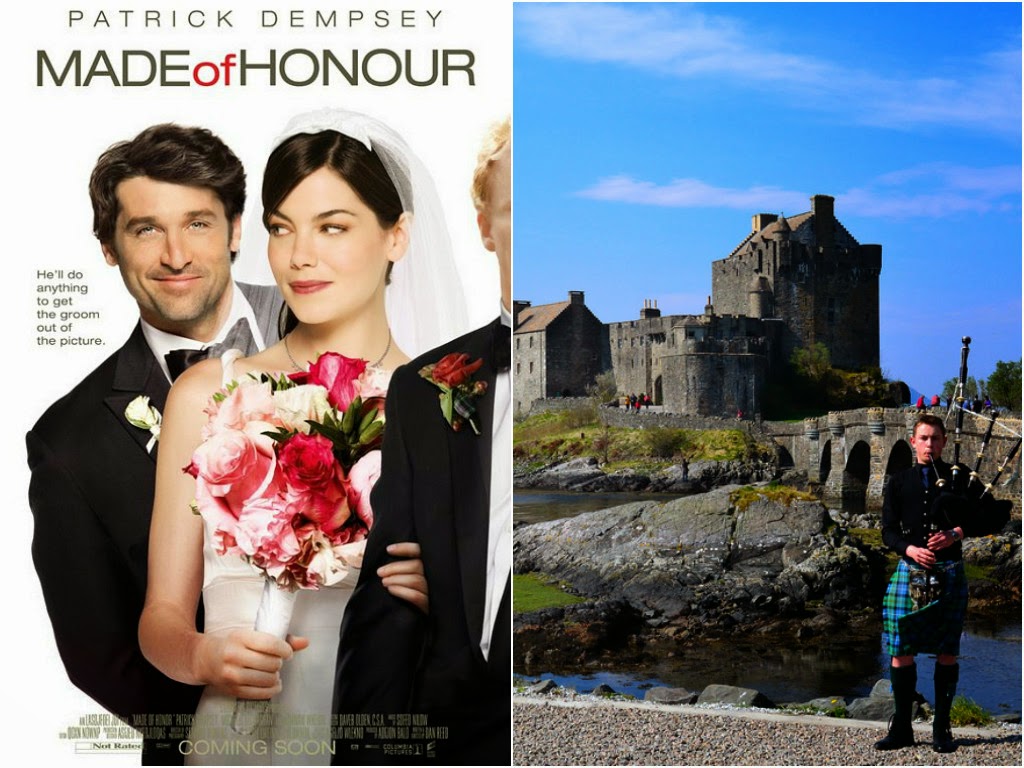 The movie Made of Honor is about a girl from the States who is going to marry a Scotsman. The second part of the movie is set in Scotland and the scenery is absolutely amazing. They’re getting married at the beautiful Eilean Donan castle and you see some of the Scottish decor throughout the castle. In addition, they show some traditions in Scotland and traditional clothing. I have yet to make it over to that part of the world and have always been fascinated by Scottish history and culture, and to see glimpses of the gorgeous scenery makes me want to hope on a plane over there! The Scottish culture is one unlike any I’ve ever experienced but can’t wait to one day. – My Tan Feet

8) The Sound of Music – Salzburg, Austria 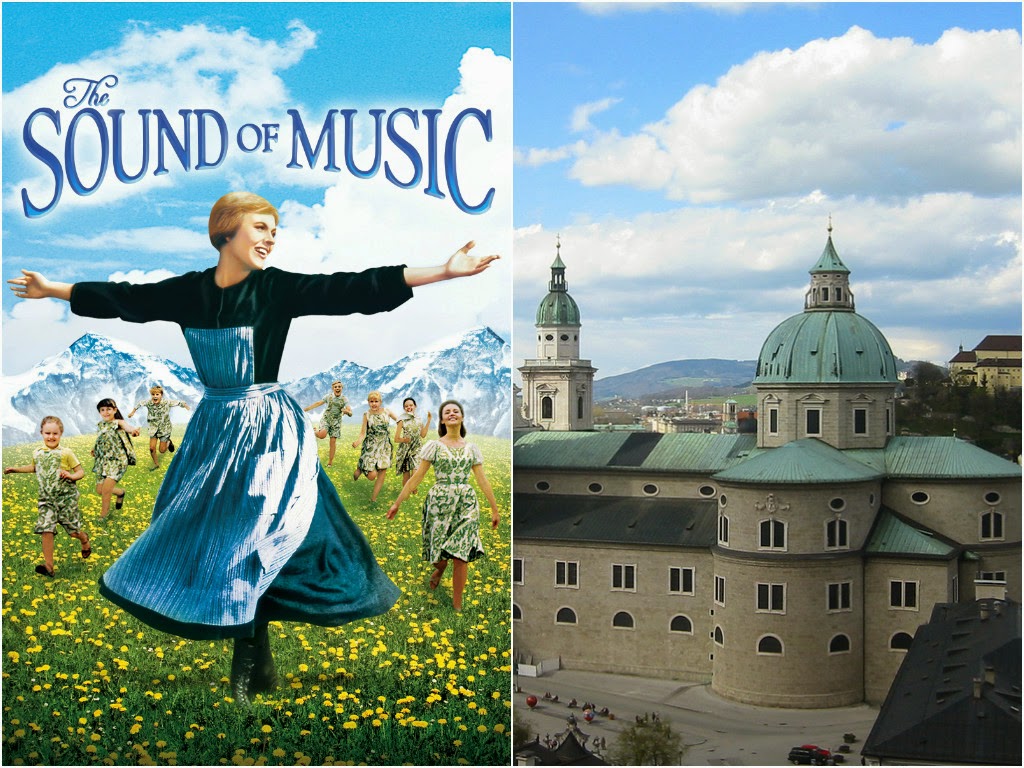 Growing up, I looked forward to watching “The Sound of Music” that one time a year it was broadcast on tv. Whether it was the beautiful scenery of Salzburg, the harmonic voices of Julia Andrews and Christopher Plummer or the family-oriented theme that got me, I’m not sure, but I absolutely loved every moment of it and still do to this very day. Hence, when I was 19, my friend Emily and I decided it was time to “see the world” and scouted out our top places to visit. After some research and lots of narrowing down, we settled on the country of Austria, and the rest is history.I have traveled quite a bit now, but I can still say, hands down, Salzburg is the most beautiful place I have ever seen. The rolling mountains are so inviting with their lush, deep green exterior and the streets are as maintained as one can expect. The stunning architecture isn’t too bad either. In fact, this city hasn’t changed a bit. I felt like I was “in” The Sound of Music, just with a little updated clothing and transportation. It’s definitely on my “return to” list. – Eat Sleep Live Ecuador 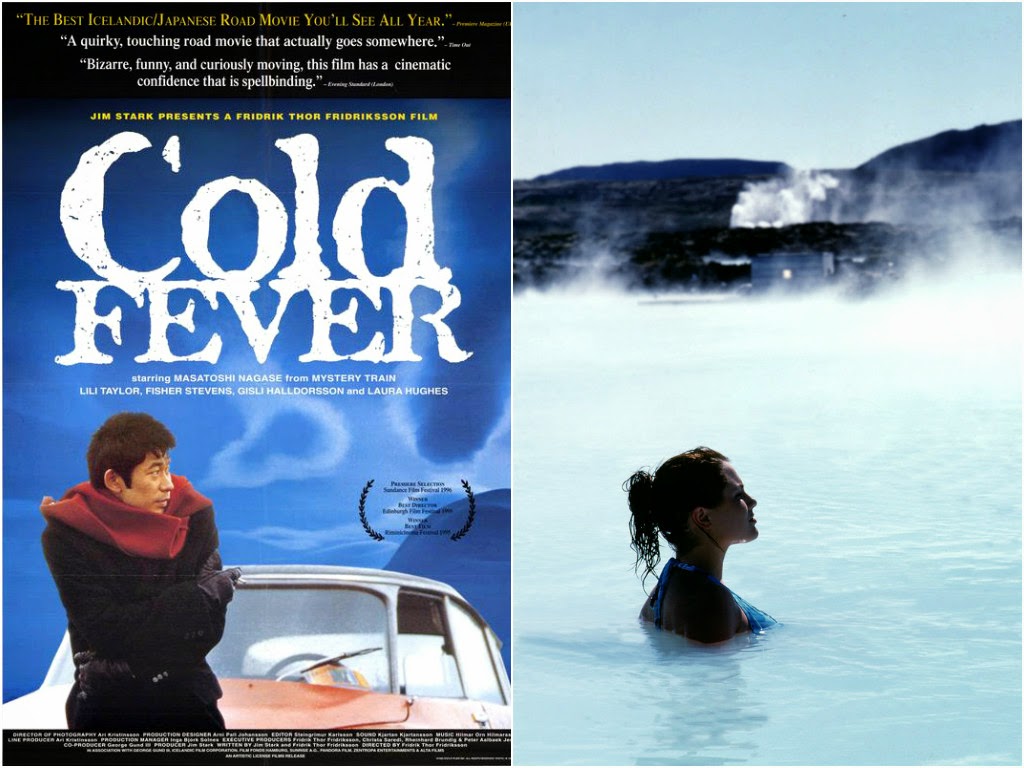 I’ve been captivated by Iceland since I saw Friðrik Þór Friðriksson’s film Cold Fever in 1996. This film completely captures the sense of place as we journey through the heart of Iceland (in the winter!) with a Japanese businessman. We join him as he struggles to understand the culture while enjoying the raw beauty of the island. And so, motivated by the film, we were finally able to visit Iceland in 2010, drive the Ring Road, soak in hot springs and experience the mysticism of the island. Iceland does not disappoint – and it was all inspired by Cold Fever. – Travel Addicts 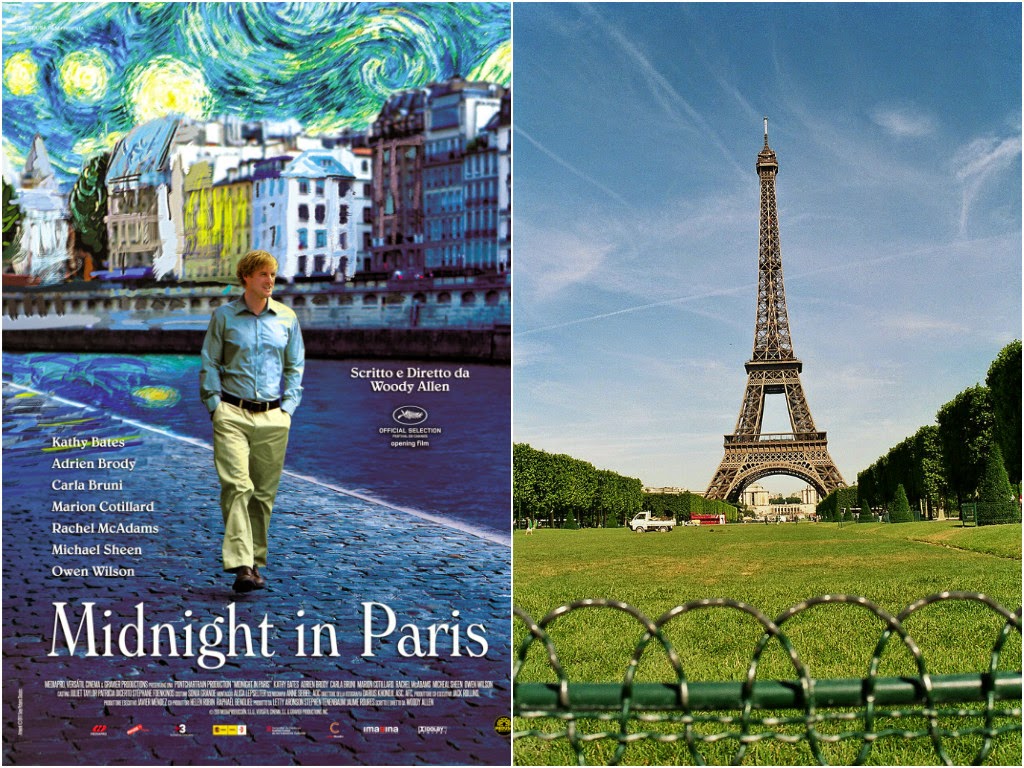 One movie that absolutely intrigues the wanderlust within me is… A Midnight in Paris. I was not born during the 1920’s, of course, yet this movie gives me a longing to have lived back then to experience life as it was in the ‘Golden Age’. After watching this movie my heart yearned to visit Paris, learn more about its history and fall in love with its beauty. – Life, Love and Adventure 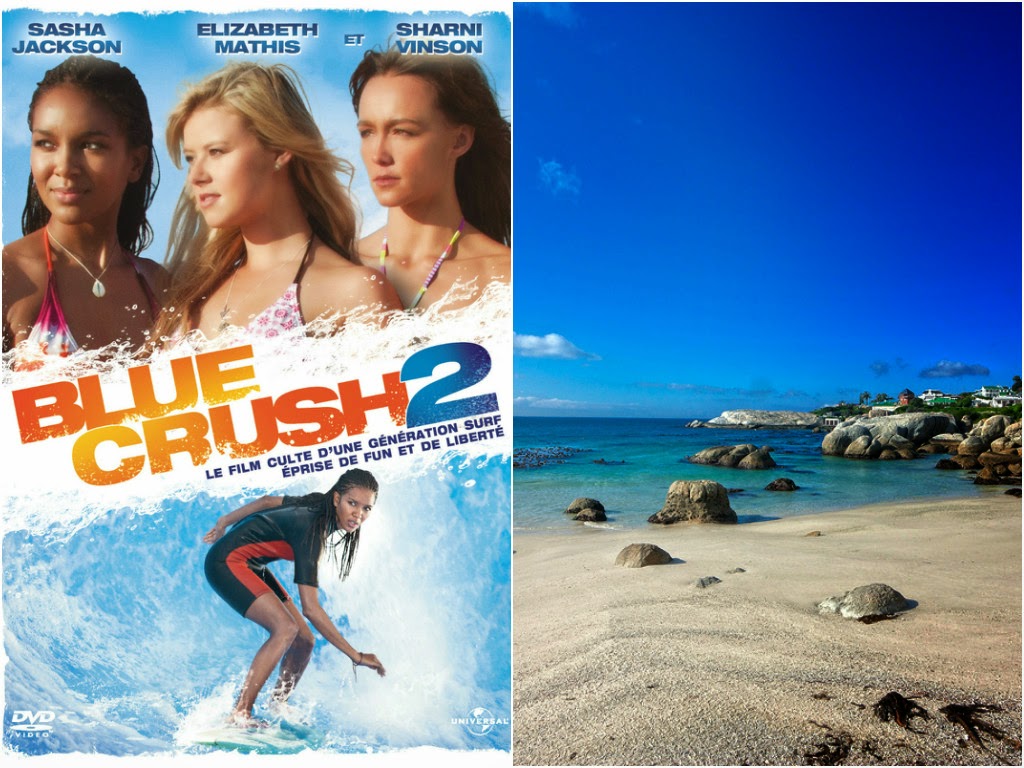 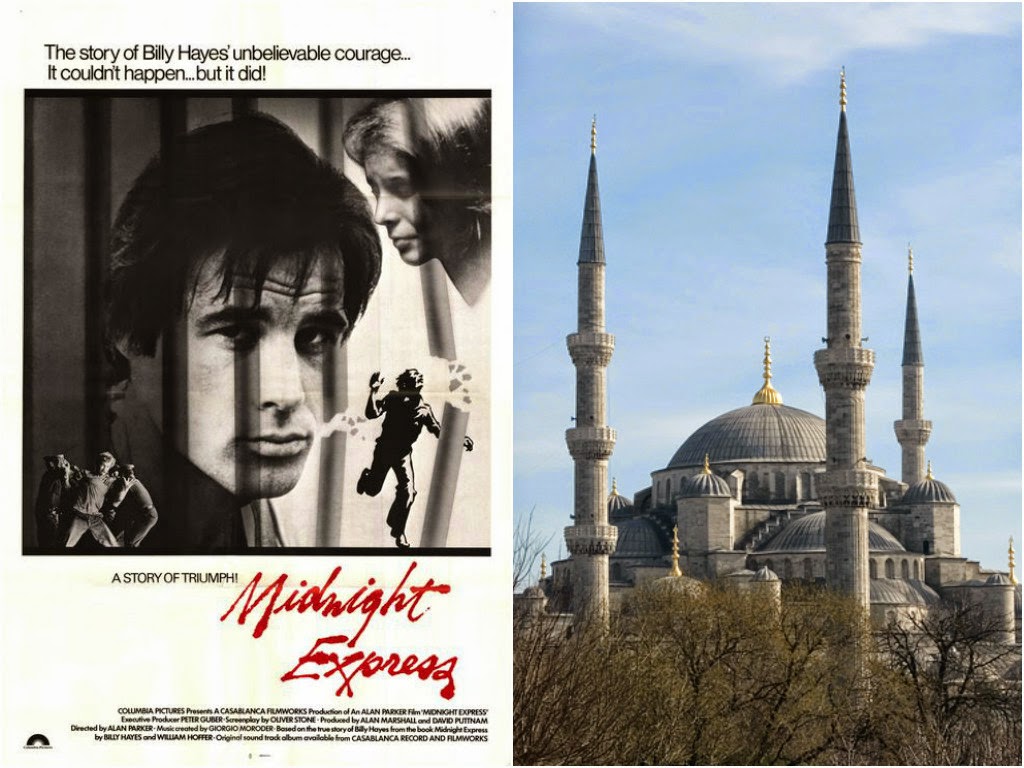 When I was just a kid, I remember seeing Oliver Stone’s brutal portrayal of an American incarcerated in a Turkish prison, and it had a lasting effect. Istanbul just seemed so mystical and exotic and foreign and bustling and everything that my hometown was not. I knew I would get there one day. It was everything I ever imagined and so much more. It’s still one of my favourite cities on the planet. The only disappointment — the prison depicted in the movie has been converted into a Four Seasons hotel. – Man on the Lam
13) Jurassic Park – Kauai, Hawaii 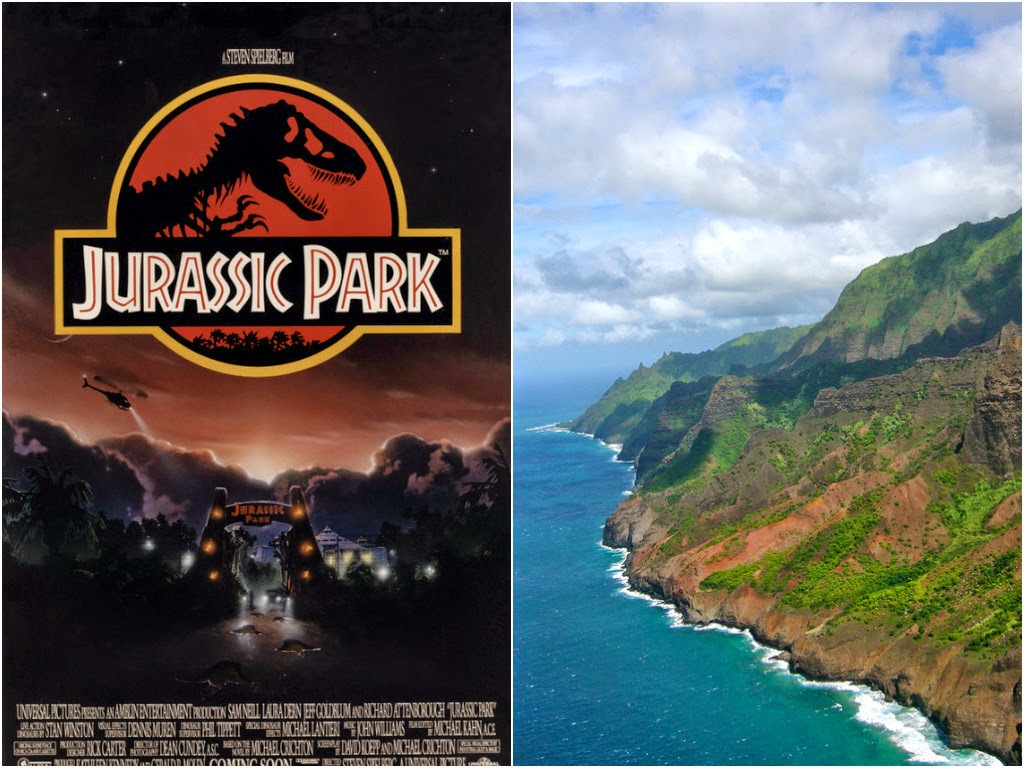 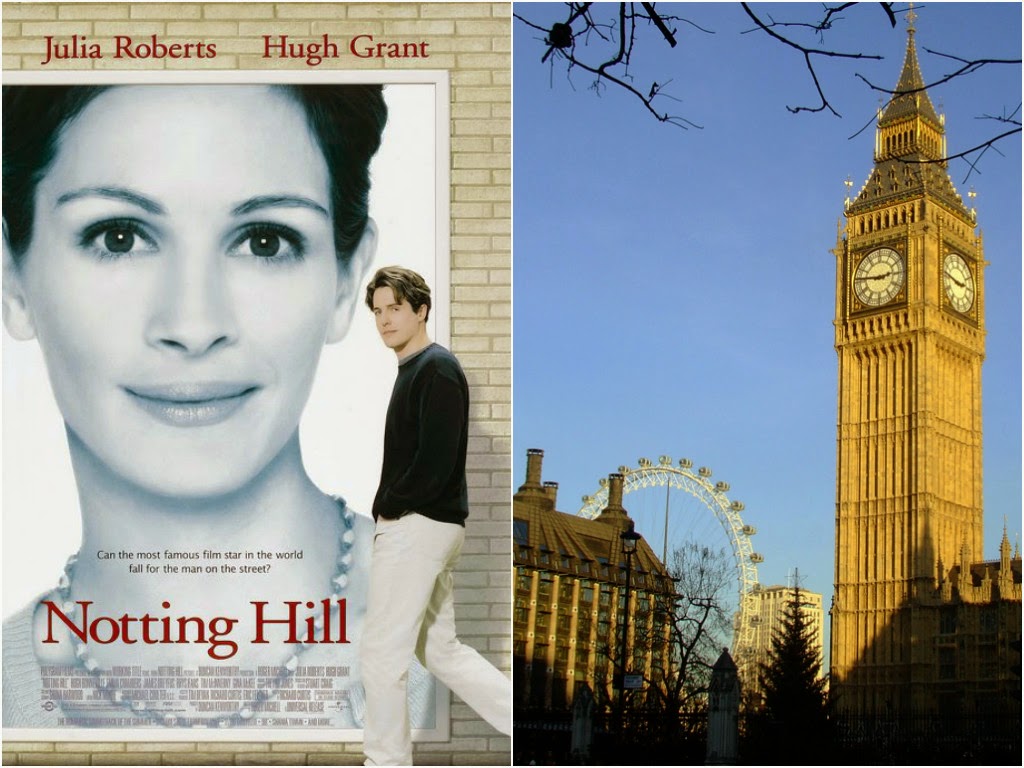 I love that movie. I saw it in London at Leicester Square and immediately made a bee-line for Notting Hill. At the time, I liked that it was relatively unknown at least to Americans. I especially enjoyed the little cafes and the flea market, where I bought some lovely dangle earrings that I still treasure. L20 but probably worth about L10. I’ve viewed it several times since and am realizing it is time to watch it again. – Berkeley and Beyond 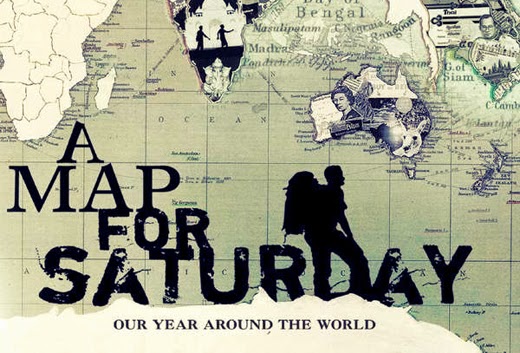 A map for Saturday followed 25 year old Brook who left a highly paid tv producers job in New York to travel alone for a year recording as he went. From saying bye to family and friends at the airport to the reality of life in hostels, interviewing other guests as he went along, quickly falling in and out of love with Sabine from Germany. Brook tells how quickly you make friends and also how quickly the time to bid farewell comes along.
Even though there are downsides, they are greatly outnumbered by the amazing places, sights and people Brook met along the way, the film’s title is due to every day being a Saturday whilst traveling, with no work to go to you are free to go out and see beautiful places, meet amazing people then go to sleep, wake up and start all over again. – Addictive Backpacking

Any other inspirational travel movies you would add to the list?

Hey There Wanderluster!
Interested in fitting more travel into your already hectic lifestyle?

Come join us!
We'll show you some tips and tricks.

And fuel your wanderlust even more by sending out itineraries and vacation snaps!

No spam! Only fun!

USA Where I've Been