You are here: Home / asia / 48 Hours in Kuala Lumpur | Malaysia
Note: Use our content for inspiration and/or future trip planning only! I'm HIGHLY advising you to STAY AT HOME! I've come up with a bunch of travel-themed staycation ideas to help cure your wanderlust until it's safe to travel again.
Damn right, affiliate links may be sprinkled throughout the awesome, free content you see below. I'll receive a small commission when you purchase from my links (at no extra cost to you), which I'll totally blow on adult things like boba tea and avocado toast. :)
Total
2
Shares
Share 0
Pin it 2
Tweet 0
Share 0

If your headed to Malaysia and only have 48 hours in Kuala Lumpur – don’t fret. With the right itinerary, you can still see so much with only a weekend in Kuala Lumpur.

Kuala Lumpur isn’t the most glamorous city in Asia. One traveler we met put it best:  “It’s a gritty, real city – has a working class vibe to it.”

This is in no way a bad thing. Kuala Lumpur has a very authentic feel to it. The locals are gracious, the food is utterly fantastic and the pace of life is nice and easy. Plus if you want glitz and glamor, you’ll find that too.  48 hours in Kuala Lumpur is nearly not enough time in the capital of Malaysia, but it will sure give you taste!

9:00AM Take the light rail to the North of the city and lose yourself in the labyrinth of the Batu Caves. This set of expansive, massive limestone caverns houses one of the most popular Hindu shrines outside of India. The caves themselves are reportedly 400 million years old and were once used by the native Temuan people of Malaysia. 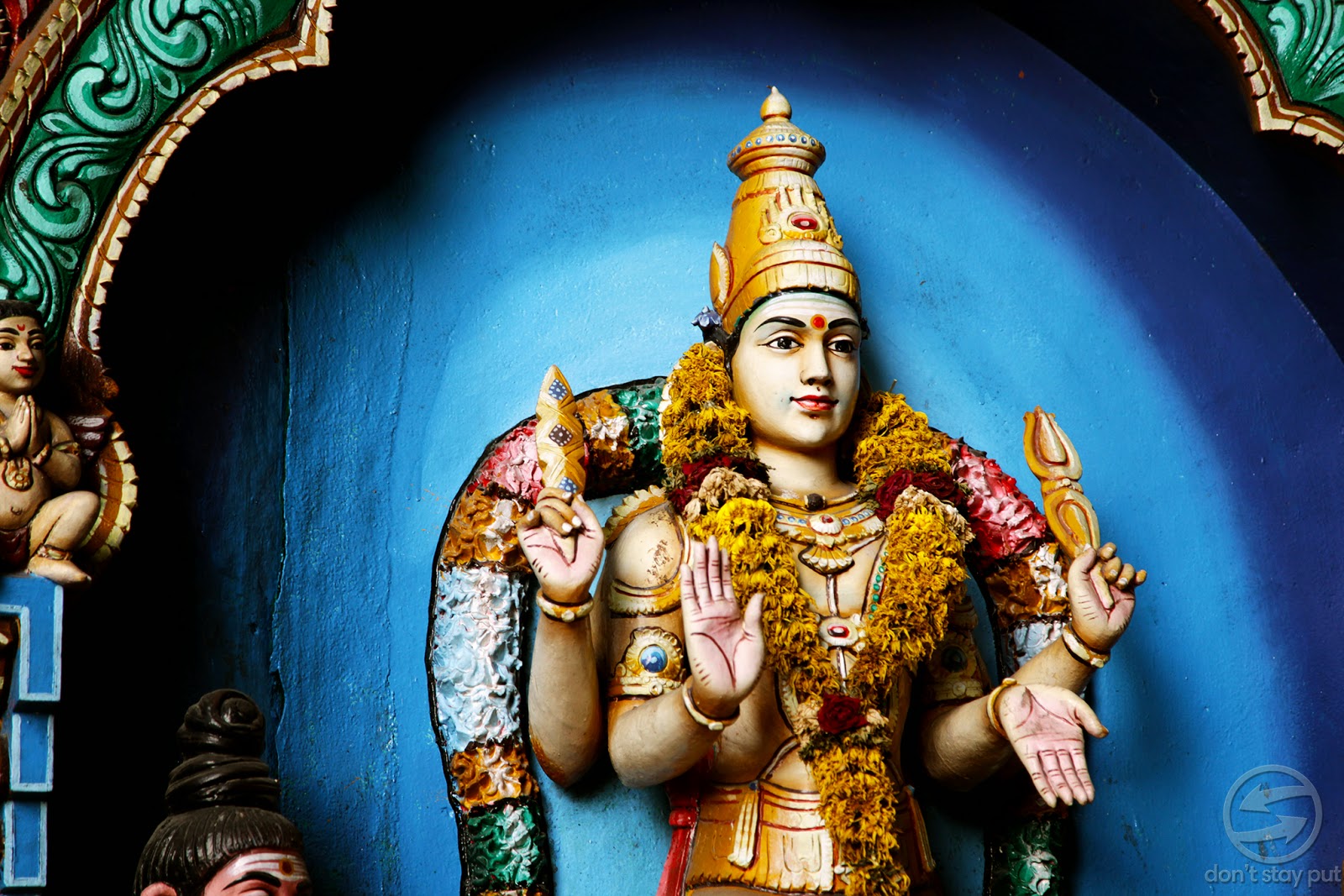 Today, visitors can reach the Cathedral Cave, which showcases a gorgeous Hindu shrine, by climbing a flight of 272 stairs. The Dark Cave is another one of the main caves and is worth exploring as well. Tours run through the cave, both educational (which lasts about an hour) and rock-climbing tours (which last about 3 hours.) 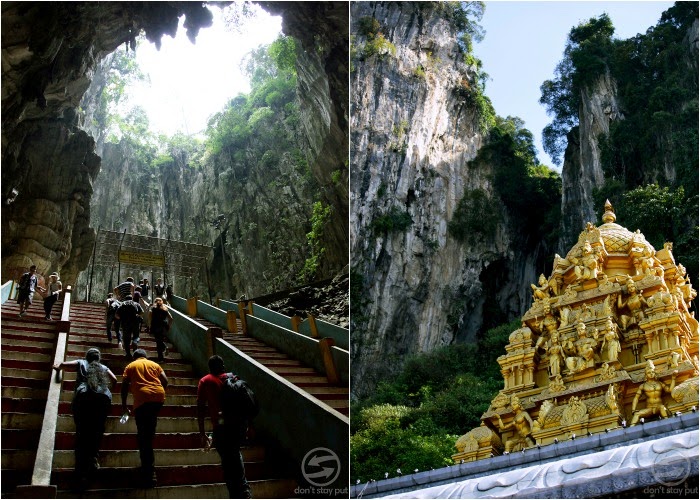 Careful with any food you may have – the caves are also famous for the havoc-wreaking monkeys.

1:00PM In Malaysia, it’s not so much where but what you are eating. Wandering through the streets you’ll experience wafts of everything from chili, tamarind, ginger and lemon grass and in a country where up to six meals a day is not uncommon, there’s no excuse to miss any of it.
Chinatown is a good place to start as the prices are dirt-cheap and selection is great. At first glance Jalan Petaling (the main street of Chinatown,) appears void of all charm – big time. Stand after tedious stand of fake Beats headphones and knock-off Prada bags line the alley, but if you veer off you’ll be rewarded for your patience.

Starting in the early afternoon the streets running through Chinatown fill up with no-nonsense plastic chairs and tables and hawker stands peddling all sorts of different noodle, rice, meat and soup dishes available for 6-7RM and up (beers run at about 12RM.) Our rule of thumb: go where there are lines of people. 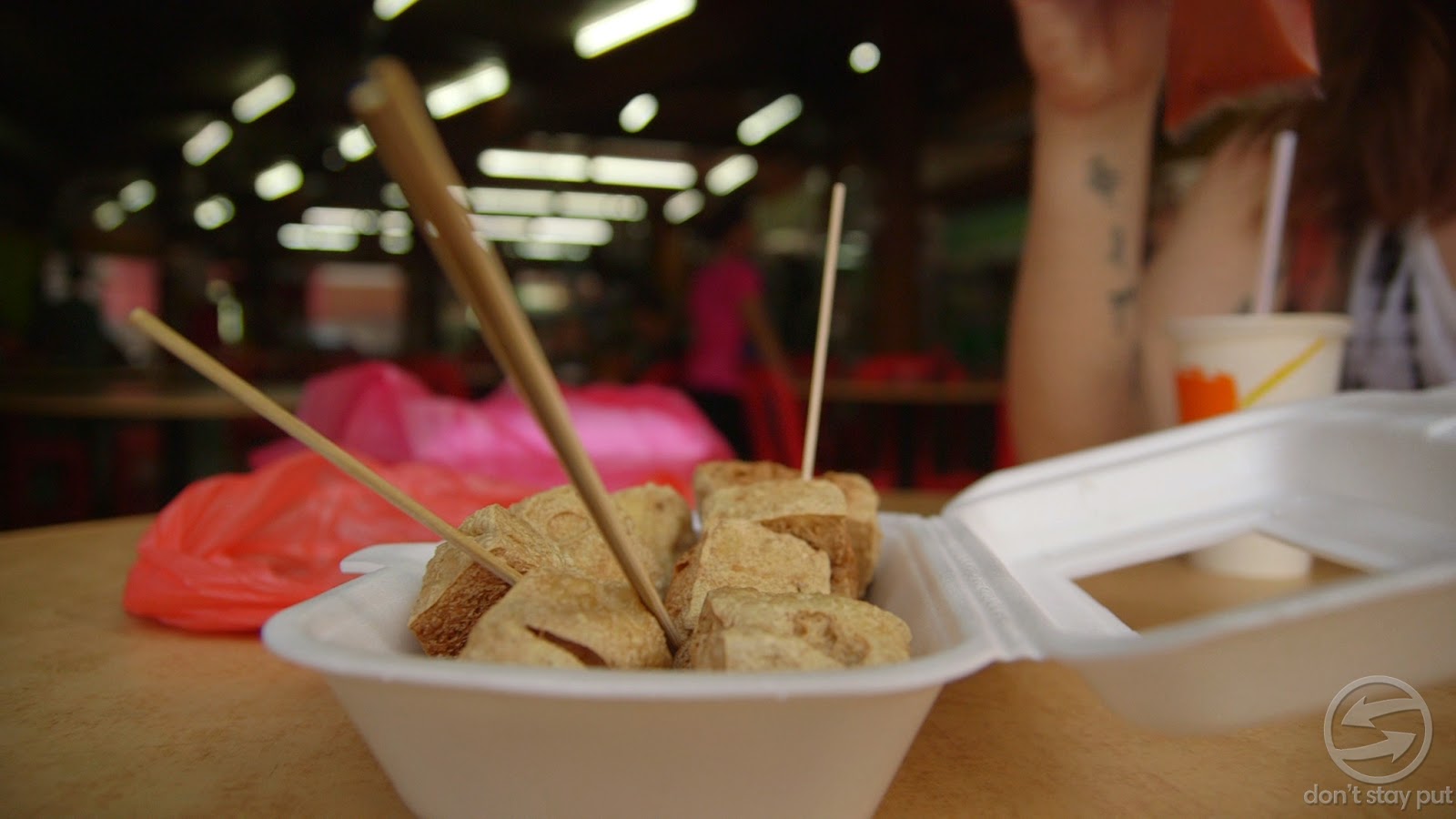 For a more authentic experience duck behind the hawker stalls and the real Chinatown emerges. Kim Lian Kee is recognized as the birthplace of the original, stir-fried Hokkien Mee, Sze Ngan Chye stall has been serving roasted duck for more than 50 years, and the sort-of-hidden Koon Kee Restuarant is famous for its wantan mee. If you’re in the area early enough, Hon Kee Famous Porridge serves up its famous frog leg porridge with a spring onion gravy until 1:30PM.

3:00PM As you twist and turn through Chinatown for its best food, don’t emerge just yet. Hidden local haunts and cultural gems are tucked away behind these streets, as well – including oldest Taoist temple in the city, the Sin Sze Si Ya Temple. Definitely not to miss on your first day of your 48 hours in Kuala Lumpur. 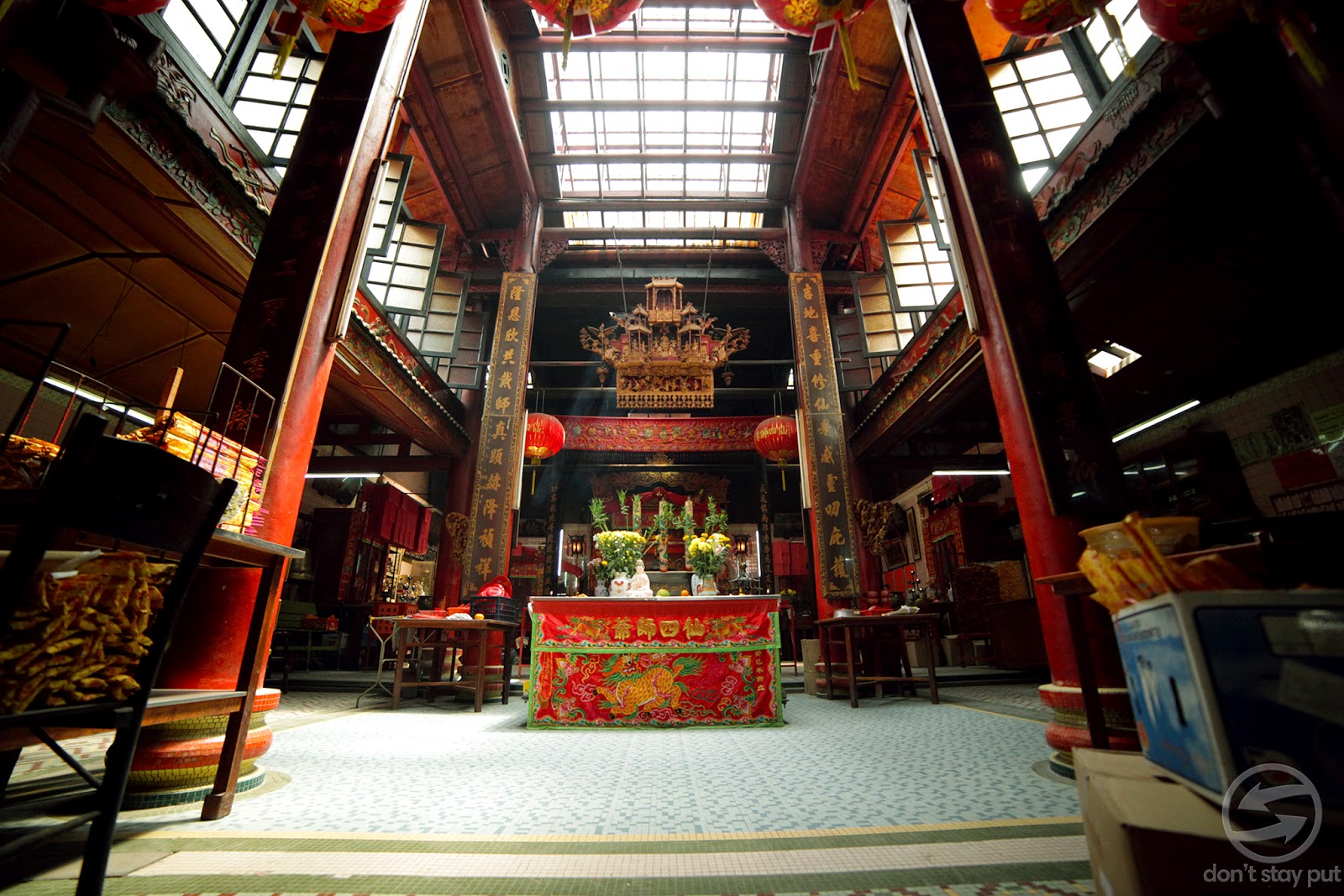 Founded in 1864, the temple is tucked away off of busy Jalan Tun HS Lee – if you’re not looking for it you’ll miss it entirely. Outside of Chinese New Year, the temple is generally fairly empty and off the tourist track. According to the caretakers, you’ll be rewarded with good luck if you circle the altar three times and can have your fortune (chim) interpreted by Madam Wong, one of the few remaining female temple caretakers in KL, for 1RM.

4:00PM While you’re in the area, swing through the Central Market Kuala Lumpur. Kitschy and stocked with knick-knacks, knock-off and row after row of loud, colorful pashminas, the busy KL market strings together the variety of Malaysia’s cultures and flavors. 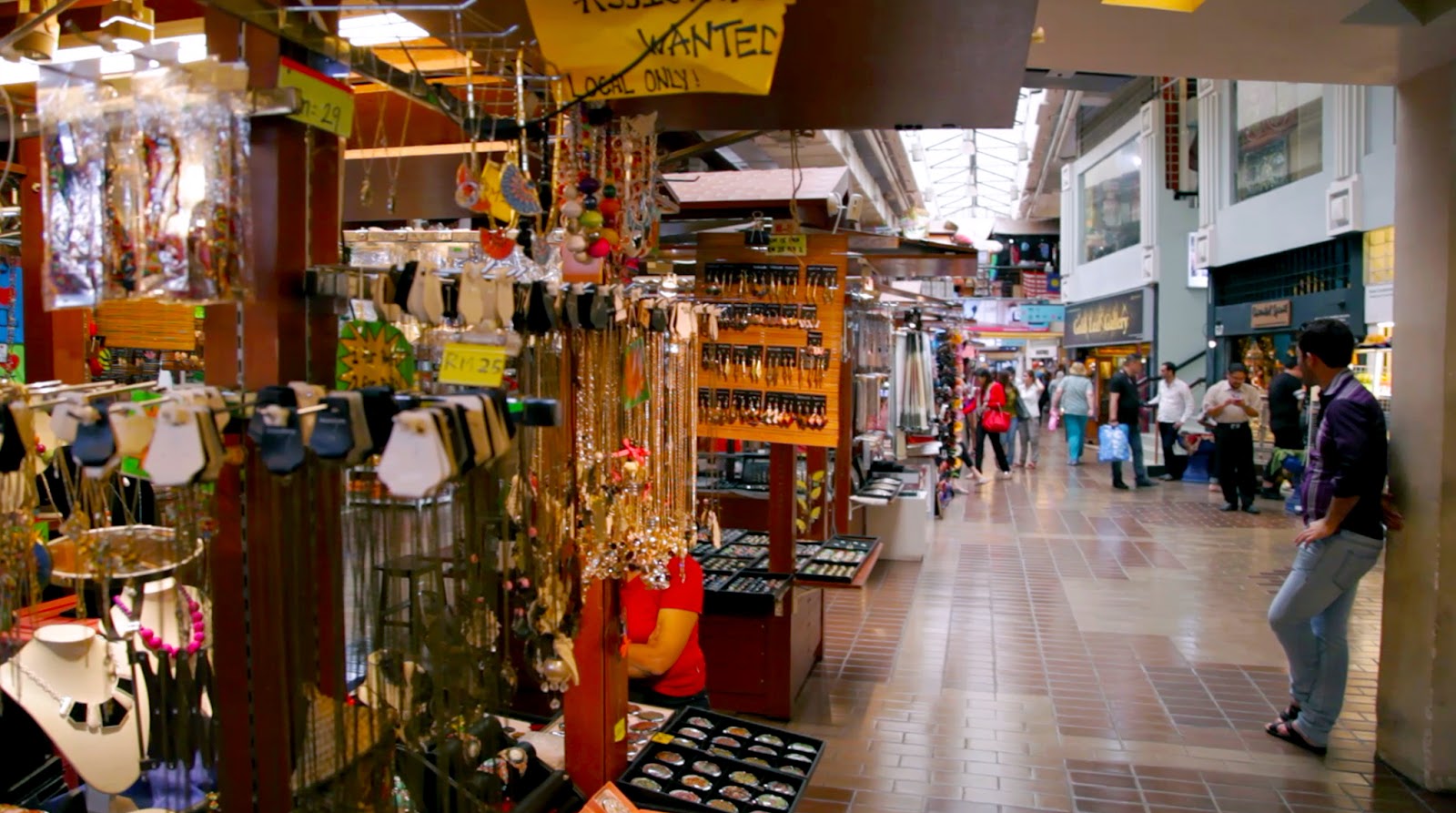 On the second floor of the Central Market, Precious Old China mixes Chinese and Malay cuisine, offering a budget menu with specialties like fish head curry and otak otak.
6:00PM Why settle for the hazy view from the Petronus Twin Towers or the Kuala Lumpur Tower when your view can include them?

With access to an actual rooftop helicopter-landing pad, Heli Lounge Bar has, undeniably, the best view of the city. You enter the Menara KH building and head up to level 34, which opens into the swanky-looking, aviation-themed lounge (side-note: I was in my backpacker’s best… so no clear dress code was enforced.) After ordering a drink (cocktails are about 25RM each,) you’ll be led to the roof – and a stunning 360 panorama of KL. The bar/restaurant also has a full menu. 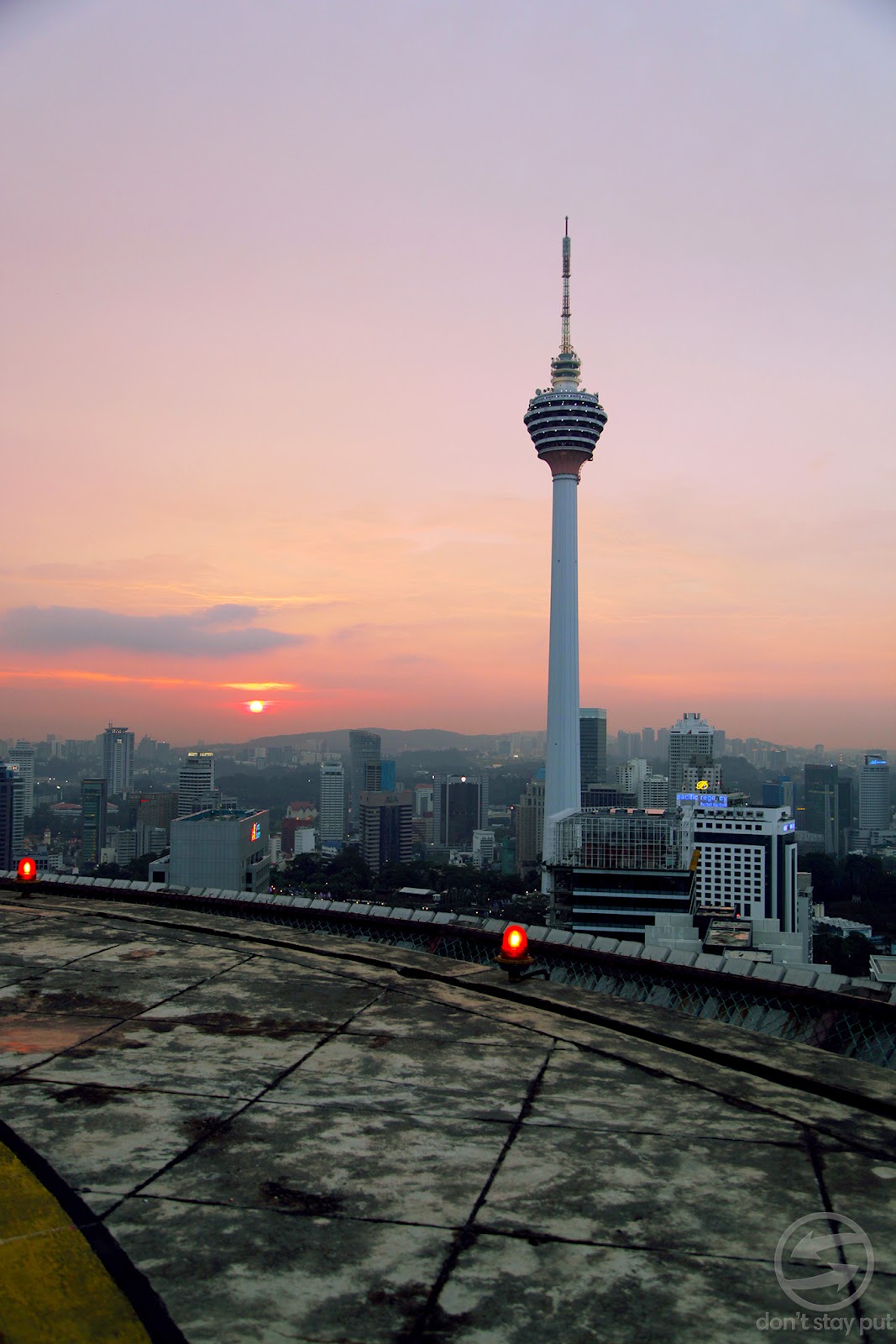 The bar opens at 6PM and seats on the helipad fill up quickly. After 9PM to stay on the roof you’ll need to buy a bottle, or can go down into the lounge on level 34.
10:00PM If you’re looking for some nightlife after the sunset, be sure to head out in Bukit Ceylon (aka Golden Triangle.)
Kuala Lumpur’s nightlife is relatively tame compared to other cities of its size, but what the city does offer is distinctive, trendy and unique. Bukit Ceylon features low-key watering holes, pubs and nightclubs that attract ex-pats, tourists and locals alike. A great way to end your first day of your 48 hours in Kuala Lumpur.
No Black Tie is one of the more unique spaces to open in the area (off Jalan Mesui,) employing the artistic and cultural spirit of KL. On any given night, jazz, funk, classical or even spoken word are part of the live performance.
[divider style=”thin” title=”” text_align=””]

8:00AM Wander through Imbi Market (also known as Buki Bintang Wet Market) for breakfast. This vibrant space is bustling from the early hours of the morning onward, and as you weave through the tropical fruit and freshly-cut meat stalls, you can fill up on aromatic Hainanese coffee, crispy popiah, pork intestines porridge, asam laksa, and every Malay dish in between. 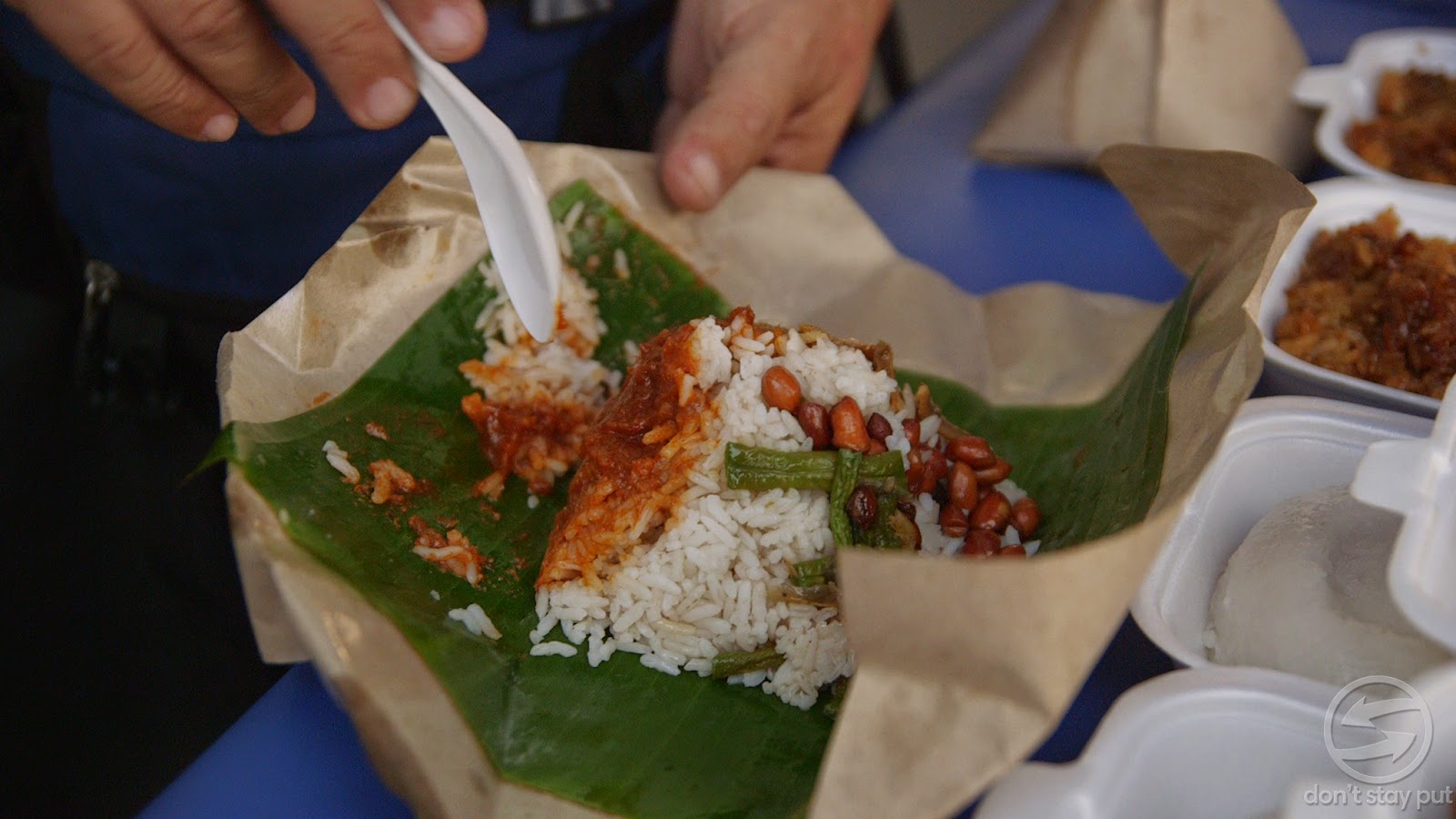 10:00AM Relieve the congestion of Imbi by opening up your senses at the Kuala Lumpur Bird Park – the largest in the world. Packed with rich flora and fauna, the park is a 21-acre aviary with more than 200 species of birds on site.

1:00PM Head down to Little India for lunch. Much of Malaysia’s uniqueness stems from its well-established and executed diversity. Home to many enclaves of cultures, the local Indian population has thrived and brought with it what many claim to be the best Indian food outside of India itself. 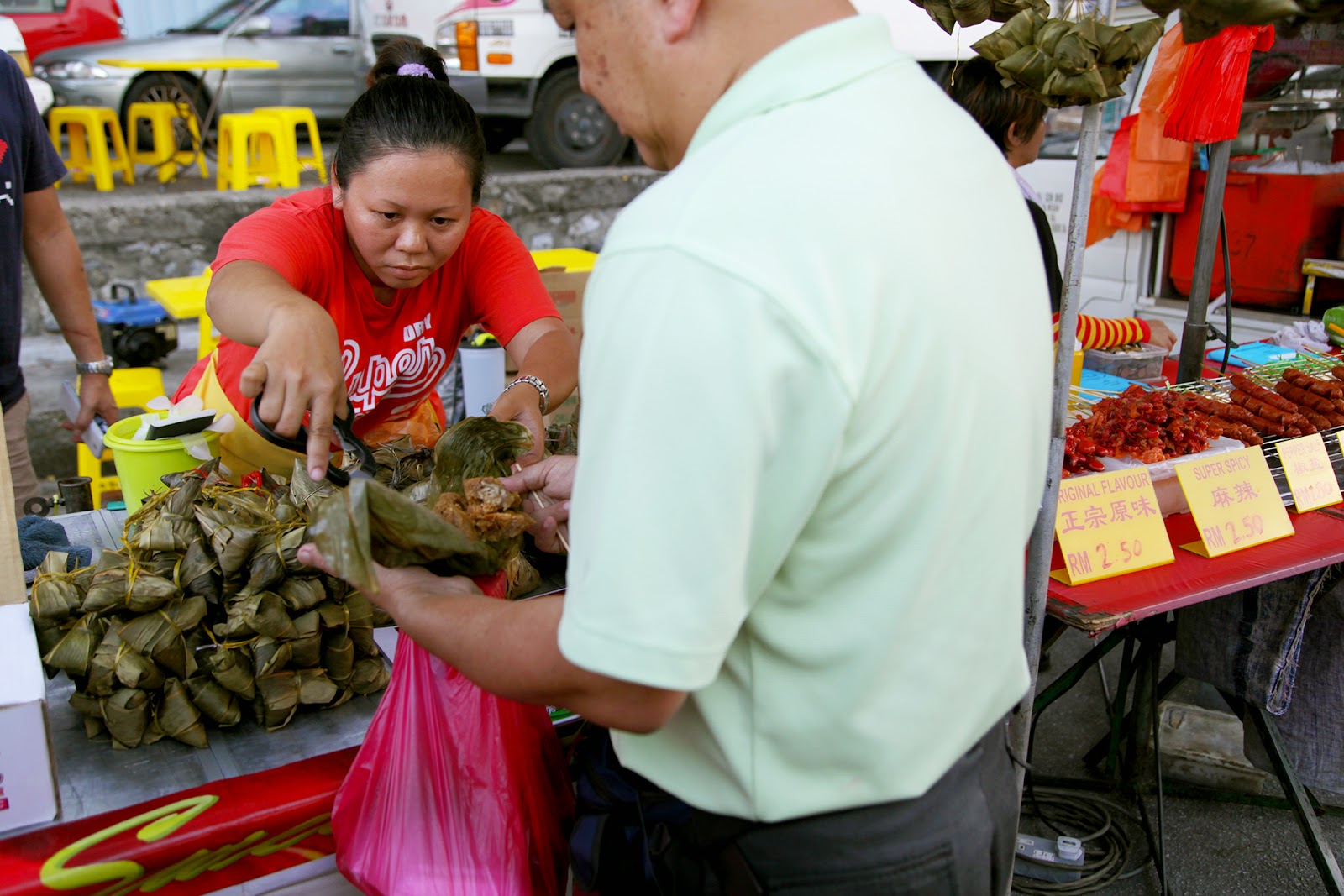 Little India swirls off the main streets of KL with an injection of color, sounds and smells. The atmosphere is much more charming and definitely exudes more of a local feel than its counterpart, Chinatown, but the food delivers just as much. Enter into any one of the restaurants that dot the streets, weaving among scented-fused groceries and textile markets, and share a few dishes (the prices will encourage you to keep buying more!) Don’t miss out on the rotai canai and spicy curries.

3:00PM While you’re in Little India, duck in to one of the areas dozens of low-cost, high-quality spas for reprieve from the midday heat. From massages to individualized treatments, everything is available in Little India – at a fraction of what you would pay elsewhere. 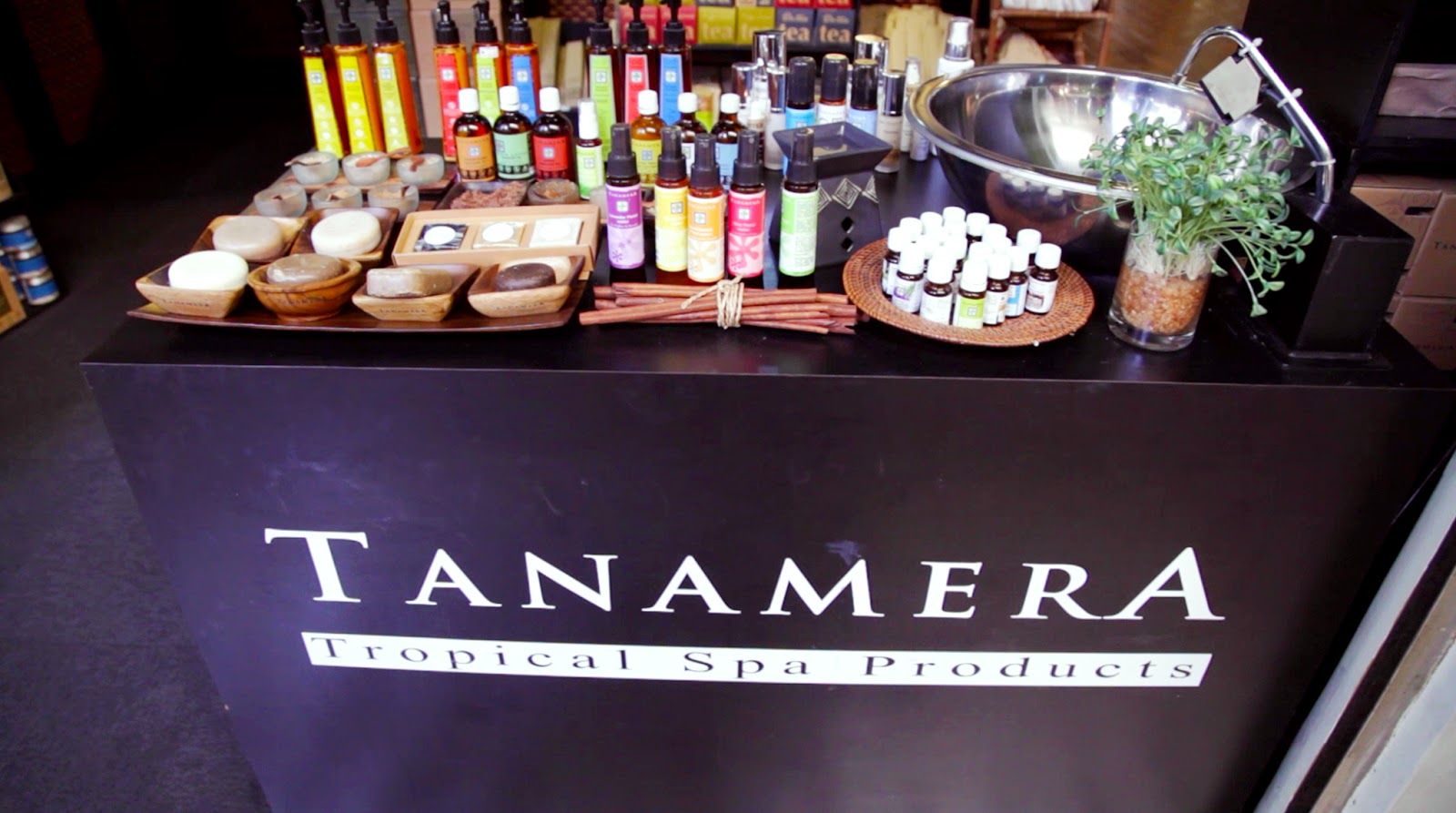 Try out the Eastern Traditional Blind Massage Center, where you can experience expert massage and reflexology from blind practitioners trained deeply in the arts.
5:30PM Capture the local spirit at Pasar Malam – or night market. Definitely a yummy thing to do during your 48 hours in Kuala Lumpur!
You don’t have to look hard for excellent, cheap food in Kuala Lumpur, but for that added local spirit, it’s only really found off the main drags. The nightly pasar malam markets sprout up in various locations (and thereby with various culinary themes) throughout the city, and while it may require a bit of effort to get there (they are often located outside of the city center,) your diligence will be rewarded.
Sink into the market, embracing the happy swarms of locals (and distinct lack of tourists) hopping from stall to stall filling up on Nasi lemak (rice dish cooked in coconut milk with chili paste and sardines,) Char Kway Teow (stir-fried rice noodles,) or our personal favorite, laksa (spicy/sour coconut-based soup.) 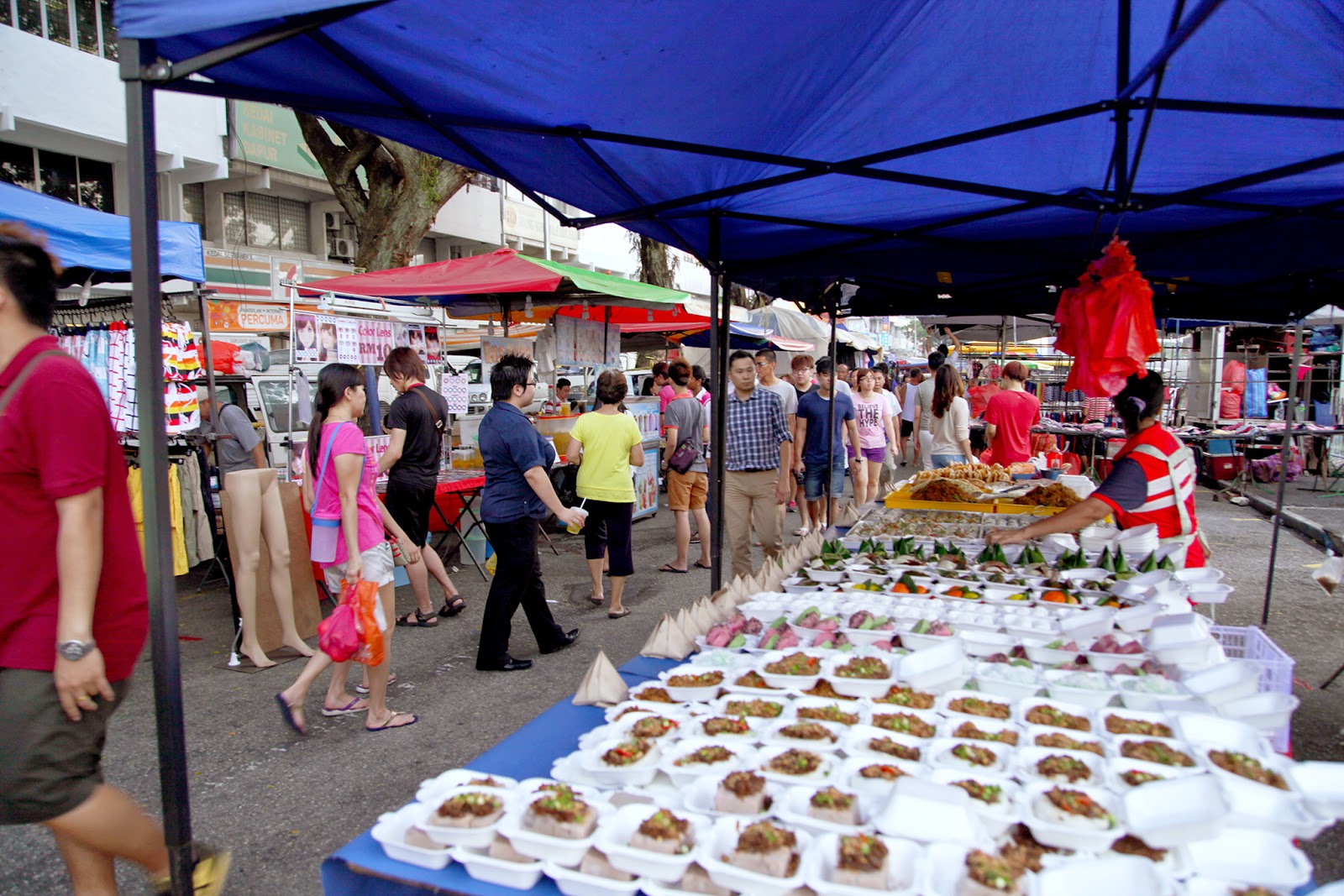 8:00PM Catch a performance at the Istana Budaya. Named one of the most sophisticated theaters in the world (and aptly translated to mean “palace of the arts”) the building itself is a work of art. Architecturally-styled after a traditional Malay house, the theater welcomes entertainment from around the world.
There you have it, 48 hours in Kuala Lumpur! And of course, it’d be a shame to leave the country without spending more time in it – alas – I encourage you to check out the best places to visit in Malaysia!
[divider style=”thin” title=”” text_align=””]
// Guest Writer: Leslie Finlay is the writer and producer at dontstayput.com, a new kind of travel blog featuring high-quality, professionally-produced video content covering the culture, sights, food and everything else we find along the backpacker trail, all as told by the travelers and locals themselves.
Total
2
Shares
Share 0
Pin it 2
Tweet 0
Share 0

The Ultimate Guide to Calgary, Canada (All the Best Local Spots)

The Mini Guide to Mendocino: A Coastal California Getaway

Penang Itinerary: What to do in Penang in 3 Days

10 Things To Do in Malaysia: SE Asia’s Most Overlooked Country